The Bank of England have confirmed that the new £5 note will be released into circulation in September this year and will feature Sir Winston Churchill, replacing Elizabeth Fry, currently on the £5 note.

The design features the famous portrait of Churchill in 1941 known as the ‘Roaring Lion’ as well as his famous quote “I have nothing to offer but blood, toil, tears and sweat” which he made on the day he became Prime Minister.

The clock on the Parliament building in the background shows the time as 3 o’clock which is when Sir Winston Churchill made the address to the public.

Just above this is his Nobel Prize in Literature which he was awarded in 1953.

Each aspect of the new banknotes design appropriately captures Churchill and his contribution to the UK.

Plastic money – and it’s not your credit card

For the first time in its 300-year history, the Bank of England will issue polymer banknotes. Polymer is manufactured from a transparent plastic film and will be made from a cleaner and more durable material which can be used to incorporate new security features. 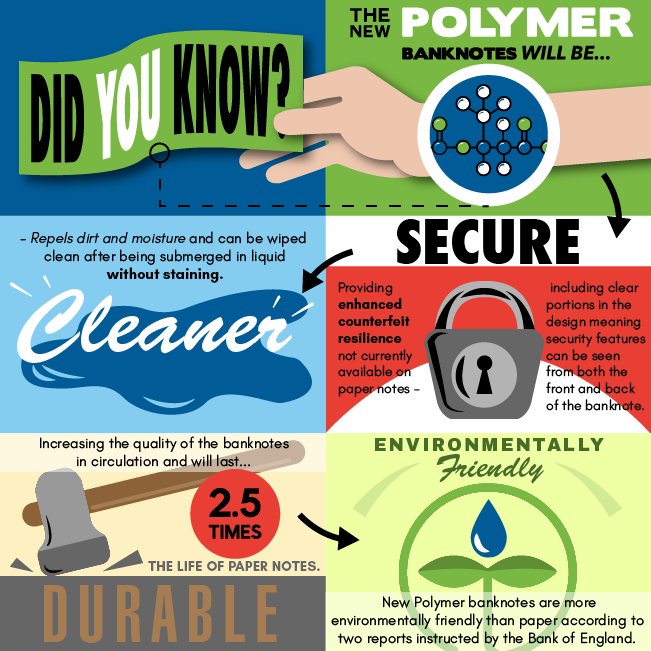 According to the Bank of England, the demand for cash continues to grow and the new polymer banknotes will shape the usage of cash in the future. It has been revealed that a new £10 banknote will be issued in 2017 featuring Jane Austin while a £20 is due for release by 2020 but it is yet to be decided who will feature.