The first Change Checker Scarcity Index update of 2018 is here. The 50p and £2 Scarcity Indexes have been compiled using data from the first three months of the year.

We’ve added a new feature to help you track the performance of your coins. The arrows signify how many places, up or down, a coin has moved on the Scarcity Index; any coins with a yellow star are making their first appearance after having been released into circulation. 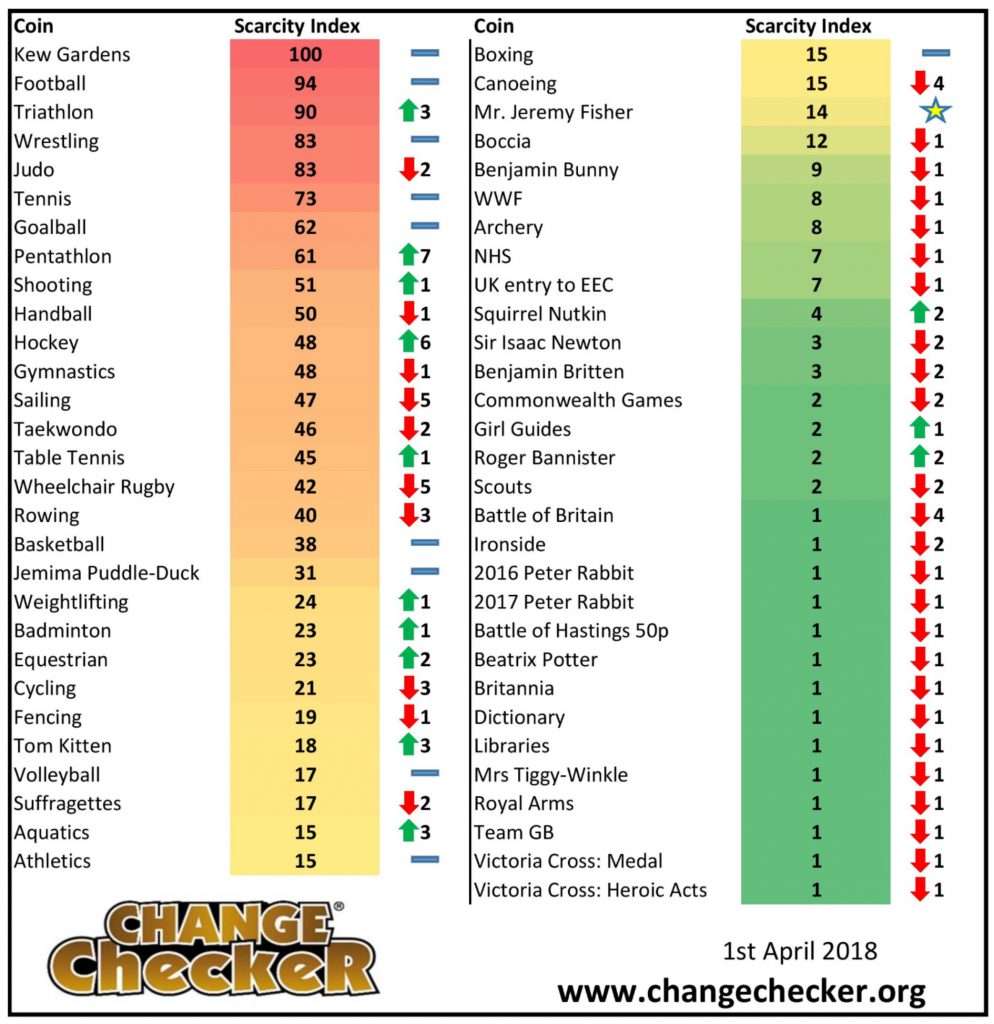 Kew Gardens remains the most scarce UK 50p coin which is not surprising with a mintage figure of just 210,000. There are a number of coins which have moved up the index quite significantly, such as Shooting, Pentathlon and Hockey, all part of the 2012 Olympic series.  Also, Triathlon moves it into the top 3, replacing Judo.

Sailing and Wheelchair Rugby, part of the same series, have not performed as well and both have move down 5 places.

Jeremy Fisher makes its debut in our Scarcity Index with a score of 14, making it the third scarcest Beatrix Potter coin behind Jemima Puddle-Duck and Tom Kitten. 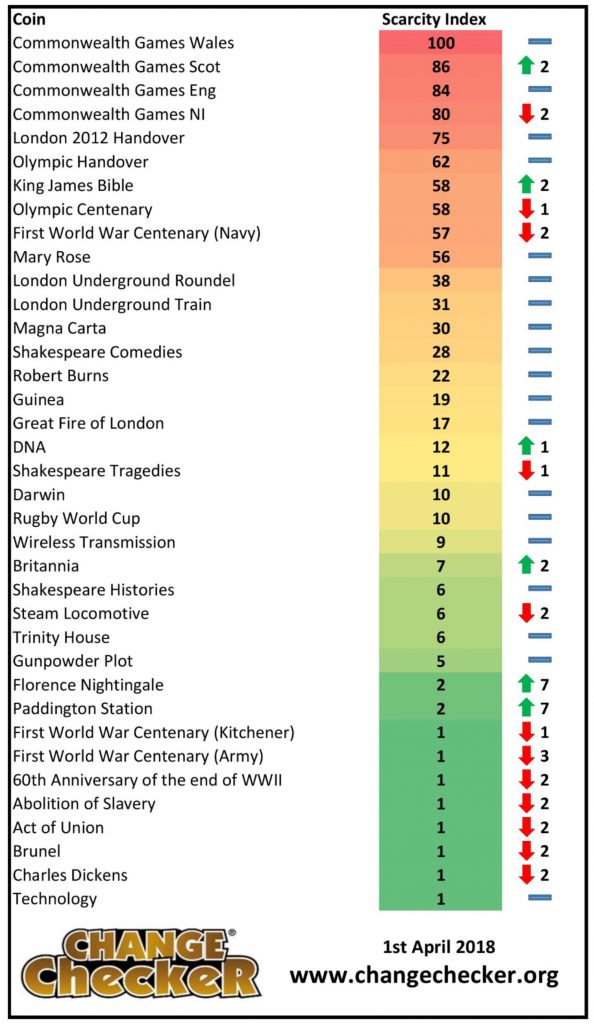 There’s not a huge amount of movement in this quarter’s update and also no new coins have been added. The 2017 WW1 Aviation and Jane Austen £2 coins are yet to enter circulation.

The Commonwealth Games Wales coin retains its spot at the top of the £2 Scarcity Index with Scotland moving up to 2nd. Interestingly Northern Ireland drops down to 4th place due to far less swap demand than the other 3 coins in the 2002 Commonwealth Games series. In fact, in this quarter, the Northern Ireland coin was requested to swap almost 50% less than the Wales, Scotland or England.

There’s a particularly strong performance from the Florence Nightingale and Paddington Station coins, each moving up 7 places.

Unfortunately, at present, there is simply not enough data to accurately compile an A to Z 10p Scarcity Index. However, we have a few early indicators to show which 10p coins may become the most scarce in future. 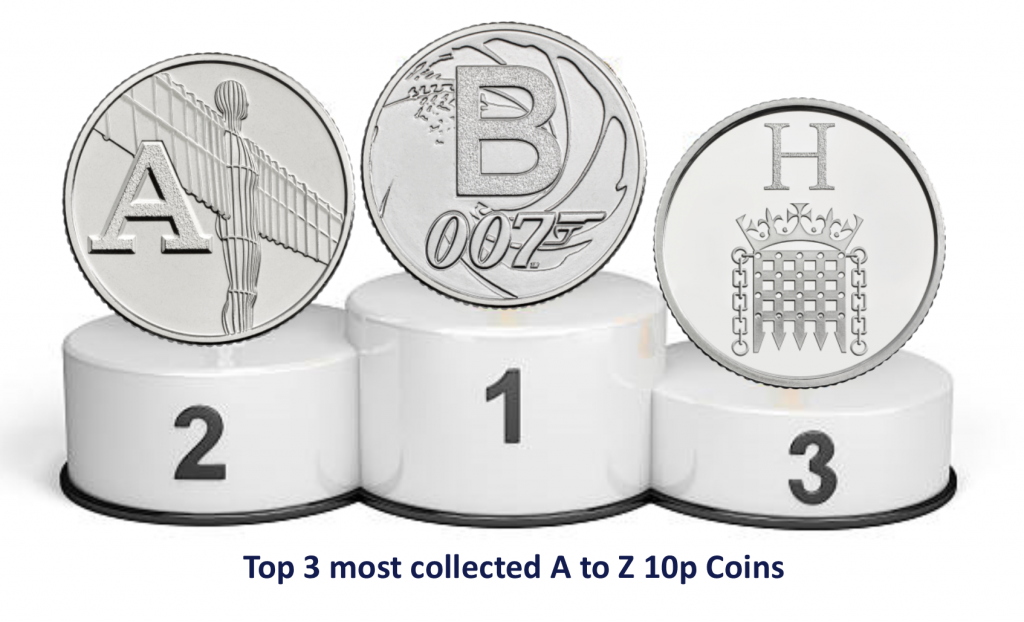 The three A to Z 10p coins that most people have in their collection are B-Bond, A-Angel of the North and H-Houses of Parliament. As people are struggling to find these coins in their change, the majority of coins in people’s collections would have been ‘Early Strike’ coins that they have purchased. Therefore this would indicate that, at this stage, these three designs are amongst the most desirable. 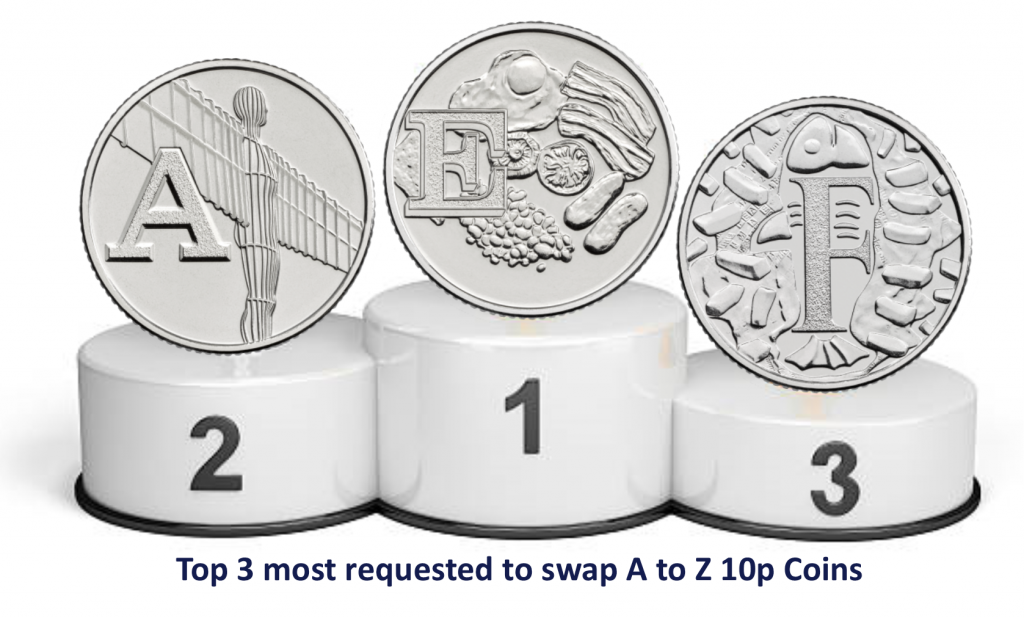