Next year Birmingham is set to host the international multi-sport event, the 2022 Commonwealth Games.

The first-ever edition of the Commonwealth Games took place in Canada in 1930. The games consists of 400 athletes from 11 countries who take part in six sports and 59 events.

Since then, the Games have been conducted every four years (except for 1942 and 1946 due to World War II). Team England has competed at every Games – one of only six nations to do so and Team Scotland has hosted the games THREE times!

The Commonwealth Games have been incredibly influential in the sporting world but they’ve also provided the UK with some incredible coin issues!

In our blog, we take a look back at some of the UK coins celebrating the Commonwealth Games…

The 1986 Commonwealth Games £2 coin changed the face of UK commemorative coins, being the first of its denomination to be struck and the first British coin being issued to commemorate a sporting event.

The thirteenth Commonwealth Games were held in Edinburgh in 1986, and are well remembered for being boycotted by 32 of the 59 eligible countries who did not agree with Britain’s sporting connections to South Africa during the Apartheid era.

These original £2 coins were never commonly found in circulation, as they were mainly struck for collectors. This made them much rarer than their successor, the bi-metallic £2 coin, as their mintage figures were much lower.

The pre-1997 £2 coins are still legal tender but they’re not used in circulation and banks/shops can refuse to accept them. Despite this, they still remain incredibly popular amongst collectors!

The reverse design of this coin features a thistle encircled by a laurel wreath over the cross of St Andrew and it has a mintage of 8,212,184.

This coin is no longer in circulation but Change Checker has strictly limited stock remaining for collectors. To secure yours with FREE p&p today, simply click here >>

At first glance, you might struggle to spot the difference between them as they all feature the same running athlete trailing a banner behind.

However, each has a different cameo, representing each of the four constituent parts of the United Kingdom.

They are some of the scarcest £2 coins now in circulation, with the Northern Ireland design having a mintage of JUST 485,500!

This coin is the least rare of the Commonwealth Games coins, with a total of 6,500,000 entering circulation.

With a total of 6 coins commemorating the Commonwealth Games, we want you to have your say and vote for your favourite!

Secure the 1986 UK Commonwealth Games £2 for your collection!

This coin can no longer be found in circulation, so this could be one of your last chances of securing this coin for your collection! 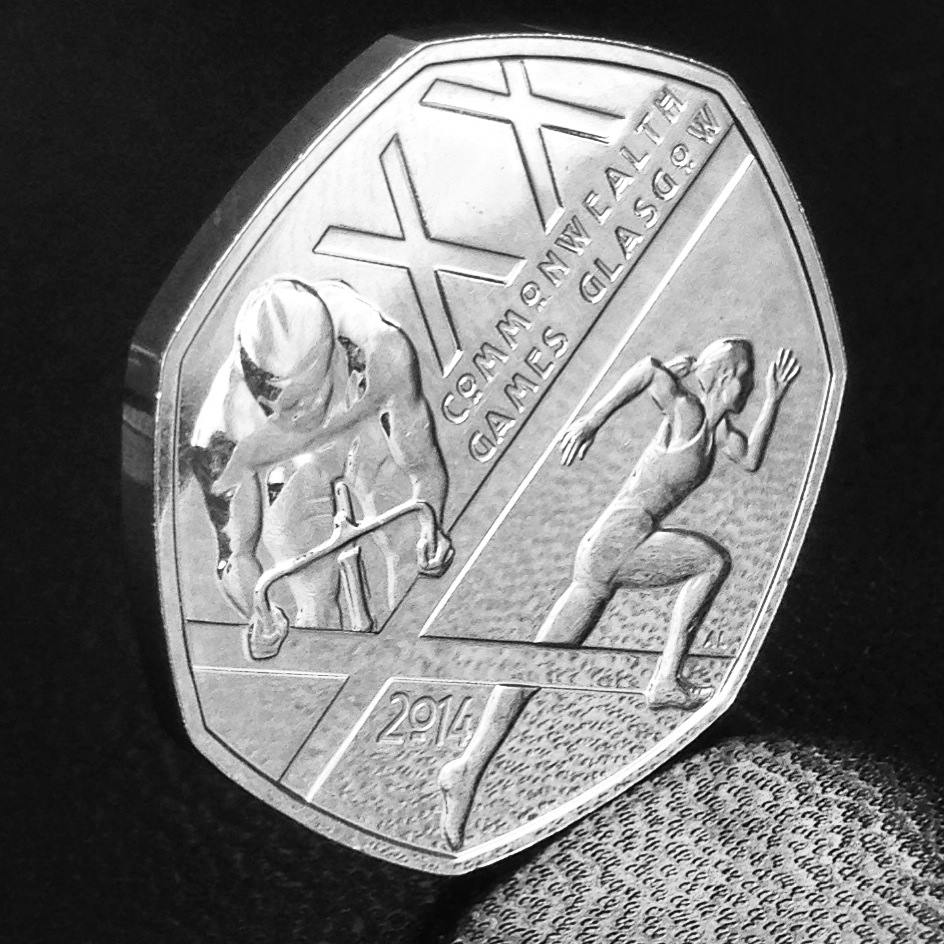 Could this be the last Scottish 50p?

Scotland has long enjoyed good representation on UK currency, especially on the commemorative coins of the last 30 years.

But with the vote for Scottish independence looming, could this be the end for Scottish themes on coins used across the whole of Britain?

If so, the 50p just issued to mark the Glasgow Commonwealth Games would become the last ever Scottish 50p issued whilst the Union is still intact.

Collectors know that ‘firsts’ and ‘lasts’ are often the most sought after issues.  Sometimes this only becomes apparent in the years following the event – when the true importance of the coin is revealed.

With this in mind, the 2014 Glasgow Commonwealth Games 50p could be one of the most unintentionally important issues of the early 21st century.

You have to go back to 1707 to find the last pre-Union coins, struck during the reign of Queen Anne.  These are now some of the most collectable issues of her reign, and usually the preserve of serious collections only.

So if you happen to be the owner of one of these 50ps, only time will tell how important it could become – regardless it’s a coin with a story of genuine national importance, and one that should definitely be considered for your collection.

Our friends at The Westminster Collection have a small number of these 50ps remaining from their Commonwealth Games commemorative range.

They are encapsulated and postmarked on the day of the closing ceremony, making them particularly limited.  Click here for more information.