In 1984 it was announced the English £1 note would be completely phased out.

It’s now been 30 years since the humble £1 banknote ceased to be legal tender, having been gradually replaced by the £1 coin and fully removed from circulation in 1988.

To remember this lost gem from the 80’s, we’ve put together 10 facts about our banknotes and coins;

1) The pound note was replaced by the pound coin and officially withdrawn from circulation in 1988.

2) Prime Minister Margaret Thatcher was sceptical about the new coin which was first issued in 1983. She told MPs it was “not very popular” and believed the pound note would be retained.

3) The Royal Mint justified the logic behind replacing the £1 note with a coin: “The £1 note was in constant use on average lasting only nine months, whereas a coin can last as long as forty years and with the growth in the vending industry it was felt that a coin would be more useful.”

5) Five pounds was the lowest denomination in note form until 1797, when a series of runs on the Bank of England led to it issuing £1 and £2 notes.

6) Cashiers previously had the pain-staking task of filling in the name of the payee and signing each bank note individually. They were relieved of this duty after the first fully printed notes appeared in 1853.

8) The withdrawal of the pound note in the 1980s was the biggest change to our currency since decimalisation in 1971.

9) The first £2 coin was issued in 1986 to commemorate the 13th Commonwealth Games being held in Scotland. The coin was not in general circulation until 1998.

10) The highest value note in circulation is £50. The most recent version is the first banknote to feature two Britons on the back – James Watt and Matthew Boulton.

Own the Last English £1 Banknote 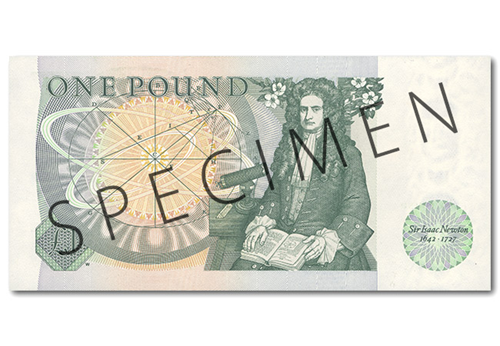 This £1 Banknote features the signature of the Chief Cashier at the time, D H F Somerset, and a portrait of Her Majesty Queen Elizabeth II.

Click here to own it now in mint uncirculated condition >>

Posted in 1 pound coins, Blog Home, Coin Info and tagged The pound note
← Could you spot a fake £1 coin?Are there valuable coins in your pocket? →