The Bank of England have predicted that the number of old £5 notes in circulation has halved, although its thought that almost 165 million of these fivers are still out there.

But don’t worry too much if you come across old banknotes after 5th May. The Bank of England notes retain their face value for all time, so you will still be able to exchange your notes at the Bank of England.

The Bank of England was established in 1694 to raise money for King William III’s war against France. Since then, the Bank have been issuing bank notes.

We’ve taken a look back at previous Bank of England £5 notes since their inception over 200 years ago.

There are not so many people about today who remember using the White Fiver, especially since it has been almost 60 years since its last year of issue. But it’s certainly the most famous British banknote ever issued. 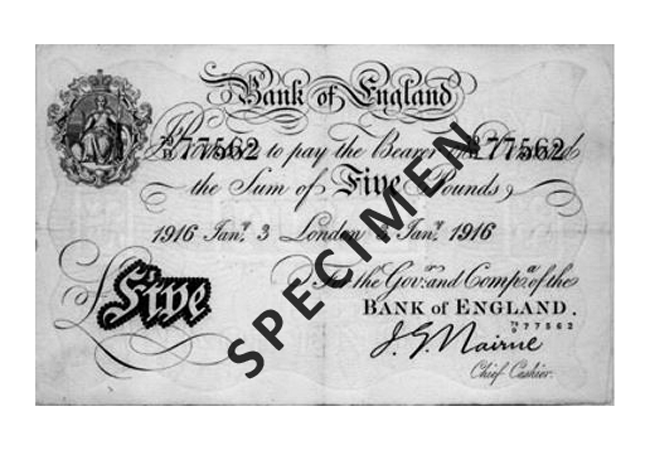 Not only would it not fit in your wallet today, it was also considered too vulnerable for copying – particularly after the Nazi’s Operation Bernhard tried to destabilise the British economy with fake ‘White Fivers’

This famous banknote was printed for the last time in 1956 – a century and a half after it was first issued by the Bank of England in 1793.

First issued in 1957, the new £5 banknote was revolutionary. Not only was it the first multi-coloured banknote, it was also the first note to feature a watermark image which could be viewed from both sides of the note.

Designed by Stephen Gooden, the note featured a helmeted Britannia on the front as well as an image of St George and the dragon in the centre, while the back featured a Lion holding a key.

This particular banknote was short lived with only this design being accepted and printed. It was also this type of banknote that was stolen during the Great Train Robbery in 1963. This note continued to be legal tender until June 1967.

The Series C £5 banknote was issued in 1963, and was part of the portrait series – this note being the first £5 to depict a portrait of a monarch.

Designed by Reynolds Stone, Queen Elizabeth II features on the front of the note in a oval window. The back of the note features a full body depiction of Britannia seated with her famous shield holding her trident in one hand and an olive branch in the other.

Among his other work, including book illustrations, portraits and engravings, Reynolds Stone also designed the official coat of arms in 1955 which is still reproduced today on the cover of our UK passports.

This banknote continued using complex designs and drawings as a security measure against counterfeits.

The 1971 Series D £5 note was designed by Harry Eccleston and was part of the series that became known as pictorial bank notes. For the first time, Series D notes not only had an image of the Queen on the front but depicted a historical figure on the reverse.

Arthur Wellesley, the 1st Duke of Wellington and one of the leading military and political figures of 19th-century Britain, featured as the historical figure on the back of this note.

On this banknote, the Queen is depicted wearing the George IV State Diadem with Queen Victoria’s Golden Jubilee necklace, while on previous notes the Queen had been shown wearing the diadem with a pearl necklace. Next to the Queen there is an image of Nike the goddess of victory and below that a seal showing Britannia.

In 1987, this banknote was revised to feature an increased width of the metal thread, which doubled to 1mm.

Designed by Roger Withington, the Series E banknote was first issued in 1990 and was the first £5 to be truly multi-coloured as well as a windowed metal thread security feature.

Roger Withington, banknote design manager at The Bank of England at the time of issue, put a strong emphasis on the turquoise blue colour used in the design. The chief cashier signature is also blue, which at the time, was considered quite radical.

The design features the historical figure George Stephenson, who was an English civil & mechanical engineer. He is best known for his achievements building the worlds first inter-city steam locomotive railway system.

The Series E £5 banknote has been revised twice since its initial release in 1990. The first revision was made in 1993, which saw the £5 at the top of the banknote changed to a darker and bolder colour – dark blue for the front and olive for the rear. This banknote ceased to be legal tender in 2003.

Still in use today, is the Series E (Version three) £5 issue.

Issued in 2002, the historical figure on the reverse of the banknote depicts Elizabeth Fry instead of George Stephenson.
Elizabeth Fry  was an English activist and social reformer who had a massive influence on the the treatment of prisoners. In 1818 she also became the first woman to give evidence in Parliament. The images on the back of the note are related to the life and work of Elizabeth Fry. This banknote will cease to be legal tender on May 5th 2017 – that’s in 100 days time.

The Bank of England issued the first ever poly,er banknote into circulation on 13th September 2016.

This summer, we’ll see a new £10 note in circulation. The new £10 note will be made of polymer and Jane Austen will become the 17th historical figure to feature on a Bank of England note, replacing Charles Darwin.

If you want to keep up to date with news and information regarding the new Jane Austen Polymer £10 banknote, please leave your details below and we will contact you in due course with more information.

Please note we will only use this information to contact you about specifically about the Jane Austen Polymer banknote.