The 2002 Commonwealth Games Northern Ireland £2 Coin is officially the most scarce £2 coin in the UK, ranking as 100 on our Scarcity Index.

But you’d be forgiven for thinking that this coin is easy to identify.

In fact, only the most eagle-eyed collectors will be able to spot the difference between the four £2 coins that make up the 2002 Commonwealth Games £2 series.

The four coins feature the same base design, making them hard to tell apart

There’s a number of reasons they’re hard to tell apart. Firstly, there isn’t just one Commonwealth Games £2 coin but in fact four different designs – only identified by a hardly distinguishable cameo design representing each of the UK’s constituent nations, Northern Ireland, Scotland, Wales and England.

Further confusion arises when the flags are shrunk to less than 1mm in size, struck during the minting process and subjected to the usual wear and tear of a circulation coin. By this stage they all start to look very similar.

Tougher still, the only difference between England’s ‘St George Cross’ flag and Northern Ireland’s ‘Ulster Banner’ flag is the ‘Red Hand of Ulster’, the star and the crown which feature at the centre. 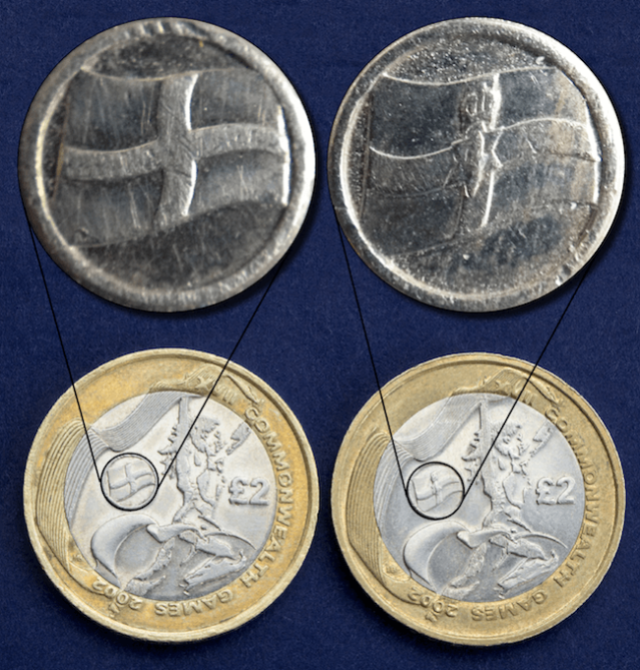 The ”Red Hand of Ulster’, the star and the crown are the only difference between the two flags

On uncirculated coins it is usually possible to see the difference between the flags and determine which coin you have found.

However, to be able to identify a circulation 2002 Commonwealth Games England £2 coin with certainty, you will likely need a magnifying instrument, such as a Phonescope. The Phonescope works by clipping onto a mobile or tablet device, magnifying the camera and allowing you to take  close-up photos and videos.

The Phonescope is the perfect tool for viewing the details of coins up close.

Suitable for all popular smartphones and tablets.