We launched the first ever Change Checker Awards to celebrate the very best people in the world of change collecting…and you certainly didn’t disappointed!

Change Checker of the Year 2017

The winner of Change Checker of the Year 2017 is Robert Durrant! 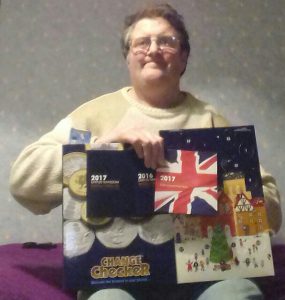 Robert has been a fantastic Change Checker throughout the whole of 2017.

He was nominated by another Change Checker due to his constant presence on our social media pages and willingness to help others with their collections.

He always has enough time to pass on his incredible knowledge and passion to other collectors.

Robert started collecting from a very early age when the old One Shilling would still be found in your change. He collects both old and new coins, especially any commemorative pieces.

Sarah was described by the colleague who nominated her as ‘a generous and inspiring collector who gives generously of her time and knowledge’. Sarah’s enthusiasm for change checking has sparked a revolution in her office; nobody who worked for the company collected coins until Sarah joined and now she’s even launched a coin collecting club! Great work Sarah!

John was also nominated by a colleague who described him as ‘a brilliant bloke who’s brilliant at collecting coins!’. He has completed his 50p, £1, and £2 collection and by sharing his love for collecting has now convinced another 4 of his colleagues to start checking their change. He’s also enlisted the help of staff at local shops and garages who check their change for him. Well done John!

Junior Change Checker of the Year 2017

The winner of Junior Change checker of the Year is Candice Clews! 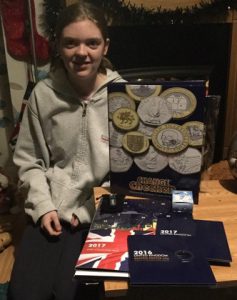 Candice is 16 years old and first became interested in coins around 1 year ago. As she came across more and more ‘unusual’ designs, Candice joined Change Checker and purchased an album for her coins.

She has enlisted the help of her family, friends and online forums and has now finished her 50p collection (minus Kew Gardens), completed the Olympic 50ps, the Round Pounds and has nearly collected all the £2 coins.

She’s gained an almost expert knowledge of both UK and British Territory coins and is always keen to help other collectors whenever possible.

Congratulations Candice, you are a very worthy winner!

11 year old Hamza started checking his change earlier this year and quickly developed a passion for collecting. He has taken his collection into school and was also awarded the ‘hobbies’ badge at Scouts. Everytime he goes shopping he makes sure that he’s given change that will include £2 and 50p coins! Well done Hamza!

Mckenna is 10 years old and has been collecting since she was small. She is a child with autism and her special interest is collecting coins with different faces on. As well as UK coins, McKenna’s collection also includes coins from around the world and has nearly completed the USA 50 state quarters collection. Many of McKenna’s family now also collect coins due to her enthusiasm. Congratulations McKenna! 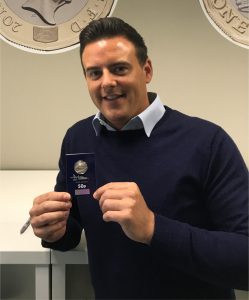 The winner of Coin Design of the Year 2017 is the Sir Isaac Newton 50p designed by Aaron West.

This award was voted for by Change Checkers earlier in the year.

This is the second year in a row that one of Aaron’s designs has won Coin Design of the year, his Great Fire of London £2 coin was voted as the 2016 winner by Change Checkers.

It’s a huge achievement given the fantastic coins that were released in 2017. Will Aaron make it a hattrick in 2018? He’s certainly going to be hard to beat. 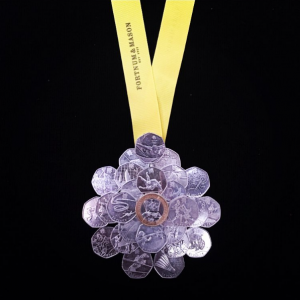 The winner of Coin Photo of the Year 2017 is ‘Gold and Silver Medal’ by Kerry White.

Kerry’s photo was the winner in the ‘Sport’ category and is a beautiful image. It utilises the 2012 Olympic 50p coins and has the 2008 Olympic Handover £2 coin at the centre.

Set against a black backdrop, the coins stand out perfectly creating a lovely medal image.

The 4 finalists were voted for by Change Checkers and the winner was chosen by our panel. Congratulations to our 3 other finalists. 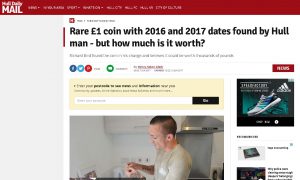 The winner of Coin Story of the Year 2017 the ‘Dual-Dated £1 Coin’ written by journalist Henry Saker-Clark for the Hull Daily Mail.

This was the first 12-sided £1 coin ‘error’ that anybody had heard of and once it had been verified by The Royal Mint as a genuine ‘mule’ the story went national. Picked up by all the major newspapers it quickly became the biggest UK circulation coin story of 2017.

A huge congratulations to all of our winners and also to all the fantastic entries we had for all the categories. We’d like to thank each and every one of you for your continued support in 2017 and hope that 2018 is a fantastic year of Change Checking for you all!

Posted in Blog Home, Coin News and tagged awards, Coin Collecting, Coins, numismatics, Rare, scarce, UK Coins, Winners
← What are ‘The Queen’s Beasts’ and why do they feature on the new £5 coins?Change Checker Festive Games →