Have you seen this coin before? It’s the only time the UK has ever had a football themed commemorative £2 coin, but you won’t find one in your change…

As World Cup fever grips the nation once again , it reminds me of Euro ’96 when all anybody could eat, drink and breathe was football-related. 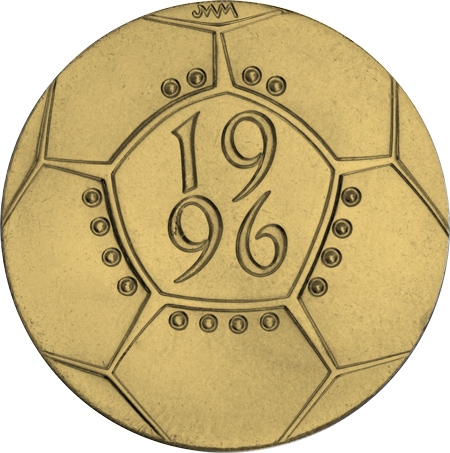 It was such a significant occasion that the Royal Mint even issued a £2 coin “in celebration of football”. Remember, this was back in the days when commemorative coins were rare, and struck mainly for collectors. Just the concept of celebrating a sporting event was unusual – the only coin to have done so prior to this was the 1986 Commonwealth Games £2.

But for such a historic event, a historic coin was needed, and this one did not disappoint.

The design of the 1996 £2 coin is attention-grabbing, with the distinctive pattern of a football adorning the reverse. It is also the first and only UK coin to feature a concave or bowl-shaped surface, which adds a convincing three-dimensional illusion to the design.

The coin is renowned for its unique concave surface, which gives the design a 3-D appearance.

Significantly, this coin was also the last of its type and the following year, the bi-metallic £2 coin which is now so familiar to Change Checkers, was introduced.

You don’t need to be a coin fanatic to appreciate the appeal which a coin like this holds for a collector. Neither for that matter do you need to be a football fan to understand what a memento this is for a lover of the game. Euro’96 was the closest England have come to winning a tournament for years, and it was a time when genuine optimism in the national team was infectious rather than the subject of mockery.

Time will tell how England will fare this time around, but let’s hope they can quietly rekindle that passion which swept over the country back in 1996!

Posted in Blog Home, Coin Info and tagged £2, The Royal Mint, UK Coins
← How the Commonwealth Games started £2 Coin CollectingWhen will I ever find a 2014 coin in my change? →