A £2 coin is a familiar sight to us – the gold coloured outer ring with the silver-coloured inner section is instantly recognisable in our loose change. That bi-metallic style was first issued for general circulation in 1997.

But did you know that the very first version was actually struck in 1994?

Not many people know it exists, but it is highly sought after by collectors. 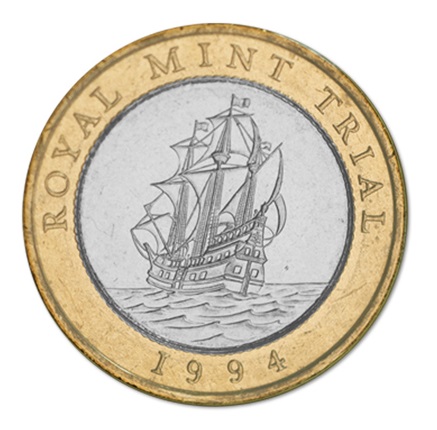 The reason this coin has remained largely unknown is that it was only issued as a trial piece, and was never legal tender. Trial pieces are used by the Royal Mint to test the minting process of a new coin, and to help the automatic vending industry re-calibrate their machines in preparation.

Other than the handful given as samples for testing, this trial £2 coin was only ever issued in a presentation pack (pictured) and was billed as “The United Kingdom’s first bi-colour coin”.

The packs contained examples of the outer and inner blanks and a nickel-brass ring to demonstrate the stages of production involved with this innovative new style. 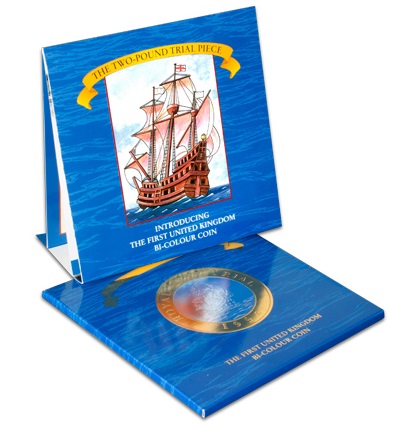 The trialled reverse design features a three-masted sailing ship. Although the ship is not named, it is likely to be the Mayflower, which set sail from Plymouth to America to establish the first permanent New-England colony. The outer ring bears the inscription Royal Mint Trial with the date, 1994.

There were just over 4,500 packs issued which makes it an incredibly rare example of a bi-metallic £2 coin.

“…more than 100 times rarer than the
rarest £2 coin in circulation.”

To put that into perspective, the £2 coin with the lowest mintage currently in circulation is the 2002 Commonwealth Games Northern Ireland design. It has a mintage of 485,500. This means the 1994 trial piece is more than 100 times rarer than the rarest £2 coin in circulation.

They are not easy to get hold of, though. If you have one, you are in a very select group of collectors. These packs often sell for well into three figures on auction websites such as ebay. Not a bad return for a £2 coin!