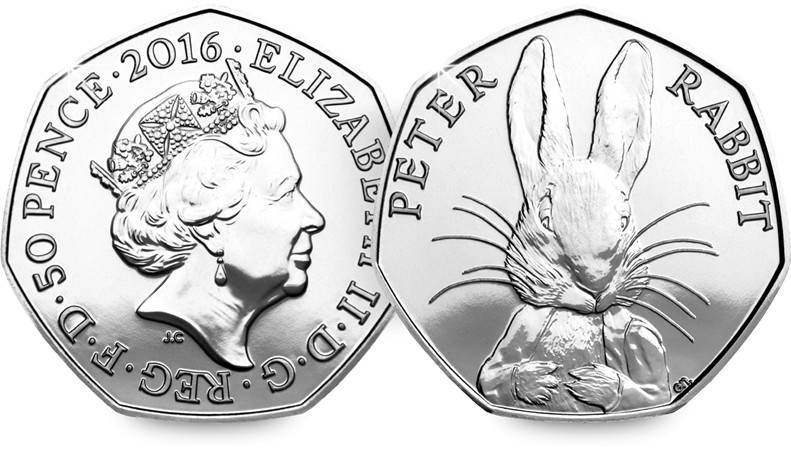 It wasn’t changed by a new currency, a new coin specification, or even a new denomination.

It was changed by a small rabbit.  A rabbit called “Peter”. 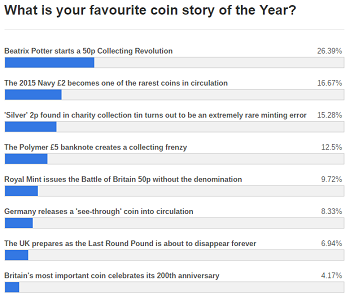 Change Checkers chose the Beatrix Potter 50p Coins as their coin story of the year.

Of course, Peter is no ordinary rabbit.  He’s the naughty rabbit at the centre of Beatrix Potter’s beloved children’s stories.

And so it was no surprise when Change Checkers voted the UK’s new Beatrix Potter coins as the coin collecting story of the year with  almost twice as many votes as the next rival.

But why has Peter Rabbit and Friends piqued a nation’s collecting fervour when dozens of other coins have barely passed mention?

So what’s the truth behind the Beatrix Potter 50p Coin?

Firstly, it’s fair to say that the Silver Coin is very scarce.  All 15,000 were sold to individual collectors and getting hold of one now is extremely difficult.  One established London coin dealer is currently offering them for a minimum of £580 in original Royal Mint packaging.

As for the base metal version of the coin, it is also destined to be one of the most wanted circulating coins of all time.  It has, after all, been the most requested swap on Change Checker for the last 6 months – breaking all previous records. 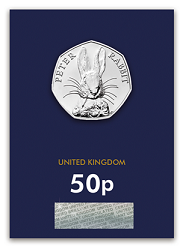 However, buyer beware.  At the moment you can still by mint condition brilliant uncirculated Beatrix Potter 50p coins in official Royal Mint Presentation Packs for £10 or Change Checker Certified Brilliant Uncirculated Coins for just £3.99.  And, of course, you still have the chance of finding one in your change for just 50p.

So for now, avoid being blinded by the hype – the most you need to pay today is just £3.99.

But there is some magic here.  The combination of a deep collectable heritage, a growing national fascination in coins, and a spiralling of demand has made Peter Rabbit (along with Squirrel Nutkin, Mrs Tiggy-Winkle and Jemima Puddle-Duck) a true collecting sensation.

And I can’t believe that’s about to die away.  For me it’s a certainty that the 2016 Peter Rabbit 50p coins will quickly disappear from circulation, destined to become one of the rarest and most sought-after 50p coins ever issued.

At the same time, it’s created many thousands more pocket change collectors, not just fascinated by Peter Rabbit and Friends but also by the 100 plus other designs that help define our nation.

Well done Royal Mint – and, of course, a small nod to Beatrix Potter too.