In 2016, the Bank Of England issued their first ever polymer banknotes to replace the paper £5 note with a cleaner, safer and stronger alternative.

Collecting banknotes is a serious hobby that many thousands of people all over the world enjoy, and so it’s no surprise that when these new notes were released, collectors were eager to start building their collection.

With so many stories in the press and listings on eBay claiming certain notes were worth way over face value, it’s easy to see how the nation got swept away with the idea of their new polymer banknote being worth thousands of pounds.

So now, three years on, and with the release of a second polymer note, as well as plans for the new polymer £20 and £50 notes, how much are your polymer banknotes really worth?

In the early days following the release of the new notes, I’m willing to bet that every single person in the country checked theirs at some point to see if they were lucky enough to find one with the prefix AA01.

Whilst these first run banknotes may be desirable to some collectors, we must remember that 1 million AA01 banknotes were actually printed for each denomination.

They aren’t likely to fetch much more than face value, and our latest eBay Tracker suggests that prices for AA01 banknotes are actually going down, with the previous figure for AA01 £5 notes dropping by £4.50 to £10.

Considered collectable due to the machine gun connotations, polymer notes with the prefix AK47 were thought to be worth tens of thousands of pounds following the new £5 release in 2016.

This idea emerged after a £5 banknote with the prefix AK47 fetched a winning bid of £80,100 on eBay. Whilst the seller must have been overjoyed with the jackpot amount, it actually turned out the buyer had no intention of paying up.

As exciting as a novelty serial number may be, there’s no way we could imagine paying anywhere near £80,000 for it! Could you?

A quick look at the most recent eBay sold prices for this serial number now show that people are willing to spend around £7.50 to get their hands on this note now, which we think is far more reasonable!

Whilst the same excitement picked up again following the polymer £10 launch in 2017, with some collectors paying between £20 and £40 for an AK47 £10 note, prices have again come down to a much more reasonable level, with AK47 £10 banknotes selling for around £15 on eBay now.

Another novelty serial number collectors were searching for was the 007 James Bond theme.

Although there must be plenty of James Bond fanatics out there, we can think of so many other items of James Bond memorabilia that fans could spend £5,000 on!

Whilst some chancers are still listing notes with 007 in the serial number for exaggerated prices on eBay, the sold listings reflect the fact that buyers just aren’t interested now that the hype has faded, with very few sold listings of the 007 £5 note and none of the 007 £10 note.

Considering all the possible prefix variations that could accompany these serial numbers, there would be just 676 notes issued for each of the key dates mentioned above, from prefix AA through to ZZ.

Whilst these might become more popular with collectors in future, the initial excitement has now died down, with hardly any genuine Jane Austen birth or death date banknotes listed for sale on eBay anymore.

In December 2016, specialist micro-engraver Graham Short came up with the idea of engraving a 5mm portrait of Jane Austen on the transparent part of the new plastic £5 notes.

He included a different quote around each one, ensuring that each note was unique.

According to Gallery owner Mr Huggins-Haig, artist Graham Short’s work has an insurance valuation of £50,000!

The first of four notes featuring art by specialist micro-engraver Graham Short was found in a cafe in South Wales, whilst another was found inside a Christmas card in Scotland. The third £5 note was found by a mystery old lady in Eniskillen in Northern Ireland who donated it to charity.

For those of you hunting down the last remaining fiver, the serial number to look out for is AM 32 885554.

As football fever hit the nation in the summer of 2018, Graham Short was at it once again, creating six unique £5 notes, each engraved with a tiny portrait of footballer Harry Kane with the inscription ‘World Cup Golden Boot Winner 2018’.

Two of the notes were given away – one to Harry Kane himself and the other to the FA – but the remaining four notes were distributed around the county and each note is insured for £50,000, so anyone lucky enough to get their hands on one can expect that sum if they auction off the fiver!

As of yet, we haven’t heard of these notes being found, so keep checking your £5 notes for the portrait of Harry Kane and look out for these serial numbers:

Generally, collecting banknotes is not about the serial number it possesses, but instead the chief cashier is of most interest, particularly on UK banknotes.

This is where real rarities can be found –  in the form of Chief Cashier signatures.

The Bank Of England will be issuing a new polymer £20 note featuring
artist JMW Turner in 2020 and also plan to issue a £50 polymer note after this.

The £50 will feature someone who has contributed to science and the chosen person will be announced in summer 2019.

Are you a banknote collector and if so, which notes do you have in your collection? Let us know in the comments below!

The Bank of England has been accused of “dumbing down” after choosing to remove punctuation from a quote by Sir Winston Churchill printed on the new polymer £5 notes.

The original concept image for the new polymer £5 notes correctly included double quotation marks around the former prime minister’s famous saying: “I have nothing to offer but blood, toil, tears and sweat.” 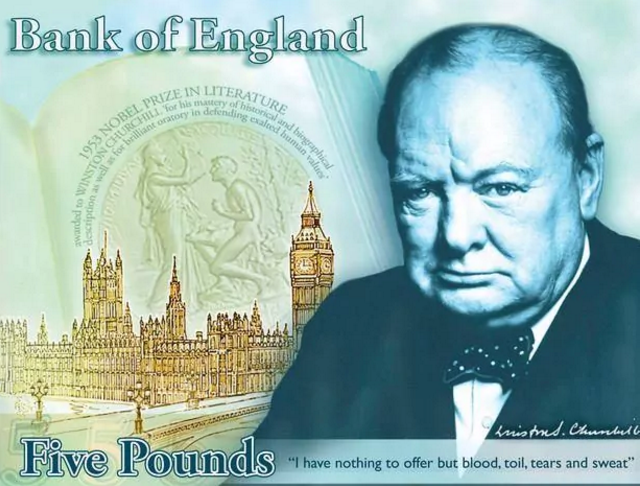 However the final £5 note design that was released into circulation does not include the quotation marks or full stop.

The new polymer fiver does not include quotation marks or a full stop.

The new Polymer £5 notes were issued in September and there are now around 400 million in circulation. You can find out everything you need to know about the polymer fiver here.

According to the Bank of England, the demand for cash continues to grow and the new polymer banknotes will shape the usage of cash in the future.

Did you know the new polymer banknotes are:

2017 marks 200 years since the death of Jane Austen – one of the best-loved English novelists of all time. And to celebrate such an inspirational female figure, the Bank of England have chosen to honour her on a brand new banknote.

The brand new £10 polymer banknote is due to be issued in September 2017 and you can find out more about the design here!

Last year it came to light that the new plastic fivers are actually made using tallow, a substance produced from animal fat.

The news sparked an online petition calling for the Bank of England to stop using tallow in the production of the notes, which has since attracted more than 130,000 signatures. You can read more about this in our previous blog.

However, yesterday the Bank of England confirmed “that it would be appropriate to keep the £5 polymer note in circulation and to issue the £10 polymer note as planned, in September.”

The Bank said it undertook a careful review of options, including destroying current notes in circulation, reprinting the notes without the tallow additive and delaying the planned introduction of polymer £10 notes but concluded that taking action would be too costly and could put the efficiency of the counterfeit measures at risk.

So do you think the Bank of England’s decision to stick with the plastic notes despite the animal fat concerns is a good or bad idea?

Let us know in our poll: