It’s time for your latest Scarcity Index update, where we reveal the UK’s most sought-after circulation coins of the last three months! As we’ve been able to go out and spend more cash in recent months, how has this impacted our Scarcity Index?

Well there’s been lots of movement across all of our indexes, as new trends have been exposed and one particular coin has moved an impressive 16 spaces!

You can use the updated A-Z 10p, 50p and £2 indexes below to discover how sought-after the coins in your collection really are.

This information has been compiled using data from the Change Checker Swap Centre and presented in the easy to use indexes below, with arrows to signify how many places up or down a coin has moved since the last Scarcity Index.

It’s English Breakfast time this quarter as this 10p has climbed a huge 16 places on our A-Z 10p Index! This is definitely the one to watch

Whilst the top 8 spots have stayed the same, there have been some really big movers towards the middle and lower half of the table. The Ice Cream and X Marks The Spot 10ps have both dropped 10 and 13 places respectfully, with other big movers including the Union Jack 10p (dropping nine places) and the Fish and Chips 10p (climbing eight places).

Regardless of where they feature in the above index, if you have any of the A-Z 10ps in your collection you should consider yourself very lucky. A maximum of only 304,000 of each design entered circulation!

We’ve had a shake up at the top of our 50p Index this quarter, with the Judo 50p being bumped down two spaces from second to fourth spot.

Last quarter our top six 50ps hadn’t moved but this quarter we’ve seen Football climb back to second spot for the first time in three quarters!

There’s also been a lot of shuffling in the middle and lower parts of the index, with Roger Bannister climbing an impressive 10 spots and Handball dropping seven.

Whilst the Commonwealth Games £2 coins have remained consistent at the top of our Index, we’ve now got our Olympic trio sitting beneath, with the Olympic Centenary climbing 3 places and the London 2012 Handover and Olympic Handover £2 coins coming in behind.

After climbing 8 places last quarter, the Florence Nightingale has dropped back down again to the bottom of the Index.

The First World War (Kitchener) £2 has climbed up a space after also climbing two spaces last quarter, so this could be one to watch over the coming months…

How your Scarcity Index works

The Scarcity Index does not necessarily equate to value but it is certainly an effective indicator.  For example, the Kew Gardens 50p coin commands a premium of up to 200 times face value on eBay.

You can use the 6 point guide to help you determine a more realistic value for your coins.

Since the first very bi-metallic £2 coins were released back in 1998, there have been over 40 UK £2 coins in circulation! Many of these coins commemorate key moments in Britain’s history and heritage.

But with so many in circulation, how can you tell which are the ones to look for?

Luckily for you, we’ve done the leg work and compiled a number of resources to help you determine how rare your £2 coin is and how much it might be worth.

A key tool for working out how rare your coin might be is our £2 mintage chart. Generally speaking, the lower the mintage, the rarer the coin and the harder it will be to find in circulation.

Here are the most up to date mintage charts for UK £2 coins in circulation, with the UK’s rarest circulation £2, the 2002 Commonwealth Games Northern Ireland sat in top spot with the lowest mintage figures of just 485,500.

Click here to read more about the 50p mintage figures >>

To help you determine the value of your coin, we’ve created our eBay Tracker, which takes the last 9 sold prices achieved on eBay and gives you the median price achieved (rounded to the nearest 50p). By taking the median, rather than an average, we avoid skewing created by one or two excessive prices achieved.

Here’s the top 5 highest selling £2 coins from our eBay Tracker, with the Commonwealth Games Northern Ireland sitting on top spot as the highest selling £2, followed by the Commonwealth Games England and Wales respectively. In 4th place is the 2017 Jane Austen £2. Mintage figures for this coin have not yet been released and collectors don’t seem to have found the coin in their change, which seems to have made the coin very popular to buy on eBay, but will you wait to find this coin when it enters circulation? 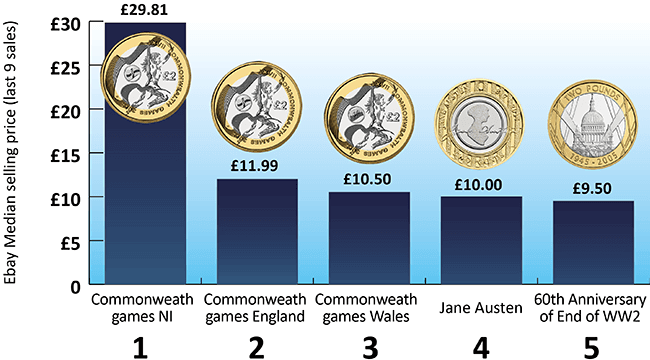 To give you a complete picture of how your coin compares to other £2 coins in circulation, we have combined the mintage information with two other key pieces of information to provide the Change Checker Scarcity Index:

Here’s our most recent Scarcity Index for £2 coins, with yet again the Commonwealth Games Northern Ireland coming in on top as the most scarce £2. Where does your £2 rank on the Scarcity Index?

Hopefully these tools will enable you to get a more realistic picture of how rare your £2 is and how much it might be worth. Of course, these figures will change in time as the latest £2 coins are released into circulation, so stay up to date with all our latest coin news and information.

Have you found any rare coins in your change recently? Let us know in the comments below.