In 2016, we took a look at the mintage figures of all 50p, £1 and £2 coins that have been released. As always, ‘The Change Checker guide to UK coin mintages’ is THE place to check how rare your coins are! Here are the charts listing each coin in order of its rarity.

The Kew Gardens 50p coin remains top of the chart and doesn’t look as though it’ll be shifted any time soon!

Due to the high number of commemorative designs, no definitive design 50p coins were struck for circulation in 2016. Of those commemorative designs, the Beatrix Potter Peter Rabbit 50p  has the highest mintage with 9.6 million pieces. However, some collectors may struggle to complete their Beatrix Potter set as it’s been revealed that only 2.1 million Jemima Puddle-Duck 50p coins were struck, making it the second most scarce commemorative 50p design (excluding the Olympic 50p series)! Squirrel Nutkin has also made it into the top 10 rare 50ps with a mintage of 5 million. 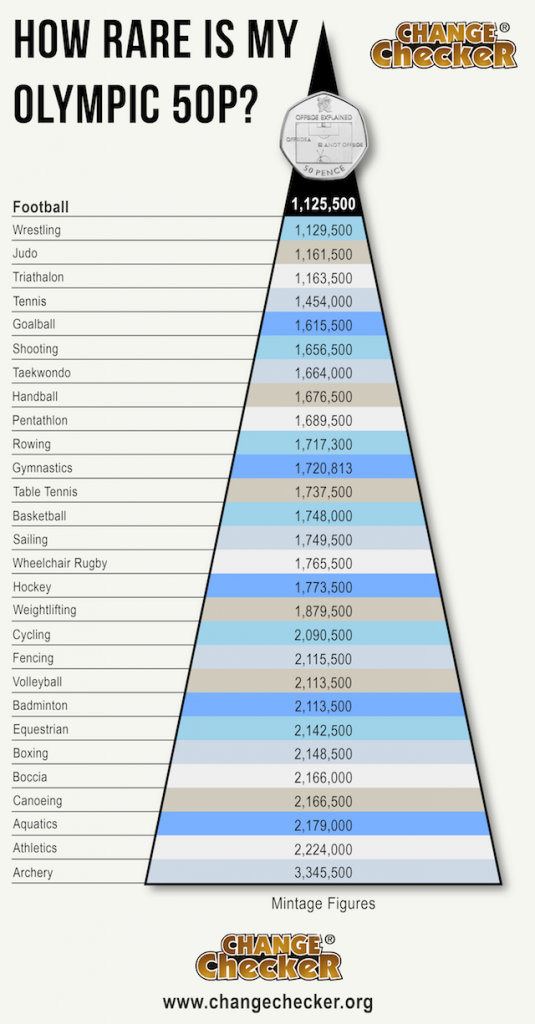 2016 was the first year since 1983 that no round £1 coins were struck for circulation due to the release of the new 12-sided £1 coin, as a result, this chart is now set in stone and the 2011 Edinburgh coin will remain the target for all round £1 coin collectors. But they’ll have to act quickly – along with the other round £1 coins it will disappear from circulation forever on 15th October.

The 2002 Commonwealth Games Northern Ireland £2 still remains the only £2 coin to have a mintage of less that 500,000, placing it firmly at the top of the chart.

From the 2016 designs, the First World War Army £2 coin has a very high mintage figure with over 9.5million pieces being struck, making it the second most common commemorative £2 coin ever.

Interestingly, the three Shakespeare £2 coins, ‘Comedies‘, ‘Histories‘ and ‘Tragedies‘ each have a different mintage figure.  Over 1.3 million fewer ‘Comedies’ coins were struck than ‘tragedies’, likely having an impact on collectability in the future.

You’ll notice that the Britannia £2 coin isn’t listed, this is because it is a definitive design, however the mintage increased to just over 3.5 million.

It will be very interesting to see how these coins fare in our updated Scarcity Indexes which will be released in July, so keep your eyes peeled for any changes.

And keep hold of your coins – you never know what they might be worth in the future! Remember you can Find, Collect and Swap all your coins for FREE with the Change Checker App: http://www.changechecker.org