Welcome to the first Scarcity Index of 2019! We’re delighted to share with you the latest update to the A-Z 10p, 50p and £2 coin indexes, so that you can see where your coins now rank.

This information has been compiled using data from the Change Checker Swap Centre (find out how it works here) and presented in the easy to use indexes below, with arrows to signify how many places up or down a coin has moved on the Scarcity Index to help you track the performance of your coins.

Although the A-Z of Great Britain 10ps are notoriously hard to find, we’ve now started to see more and more of these coins being added to people’s collections on the Change Checker app, and we’re able to use this data to build up an even more accurate picture of how sought-after each design is, using our Scarcity Index. 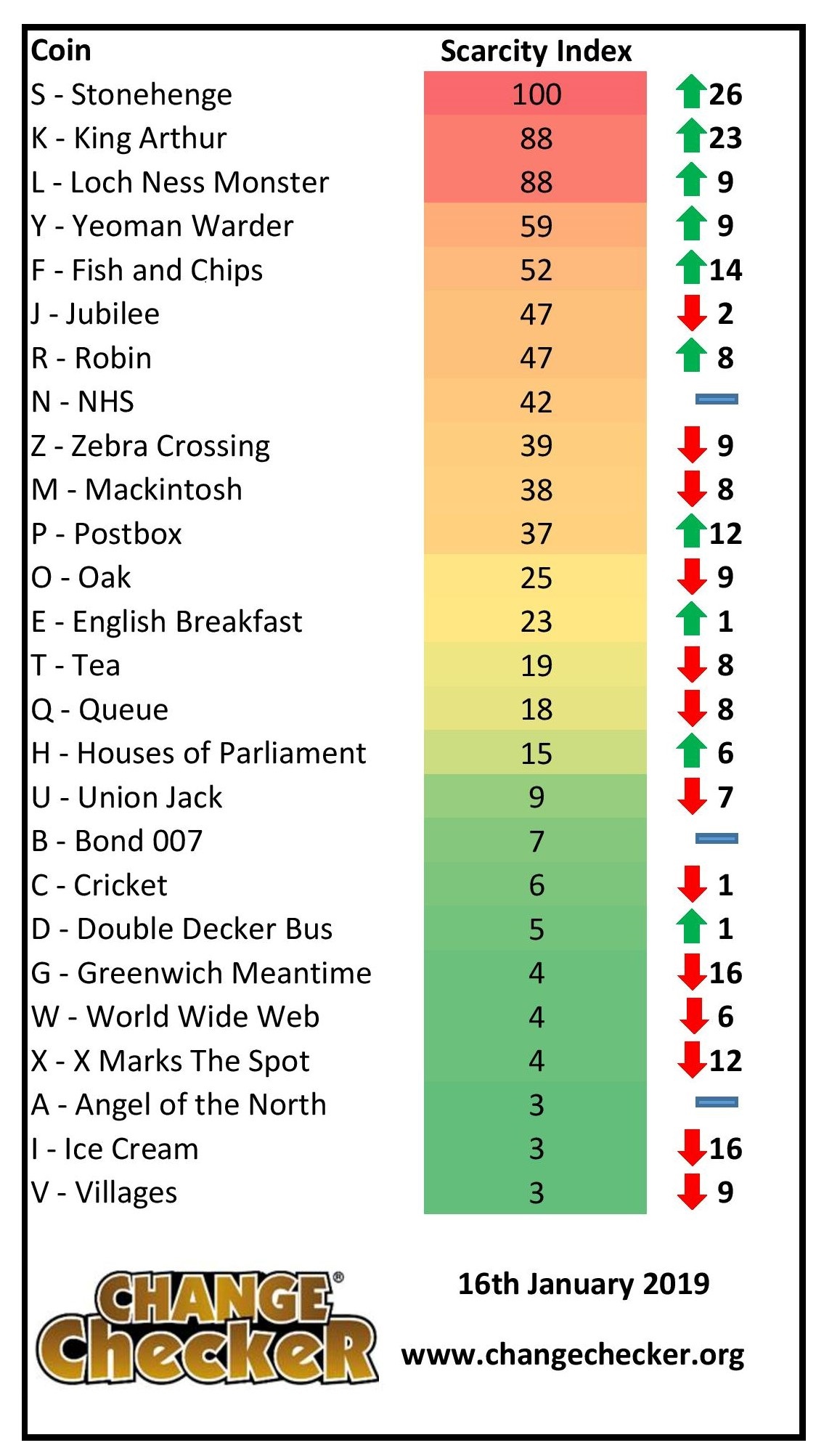 As you can see, now that we have more data to base the index on, there has been a lot of movement from the previous update. Whilst this was to be expected, we have seen some dramatic changes, in particular with ‘S’ for Stonehenge, which has jumped from the bottom to the top spot and is currently the scarcest A-Z 10p!

‘K’ for King Arthur has also jumped up by a massive 23 places and is now the second scarcest A-Z 10p. Finishing off our top 3 is ‘L’ for Loch Ness Monster, which has moved up the index by 9 places.

Down at the bottom of the index, we’ve seen ‘V’ for Villages drop 9 places, ranking it as our most common A-Z 10p. There was a 16 place drop for ‘I’ for Ice Cream, making it the second most common amongst Change Checkers. And finally, sitting in the third to last spot is ‘A’ for Angel of the North, which is actually one of only three coins to remain in the same position as the previous index.

‘F’ for Fish and Chips and ‘P’ for Postbox are other coins to keep your eye out for, as they have both jumped up significantly since the previous index.

Whilst we now have a lot more A-Z 10ps being listed in people’s collections, there are still relatively few swap requests for these coins, so it seems likely that if people are managing to find the coins, they are possibly keeping hold of them and only swapping the duplicates that they may be lucky enough to find.

The Scarcity Index will continue to become more accurate as more data is collected and the coins are swapped more often.

It comes as no surprise that the Kew Gardens remains king of the 50p Scarcity Index and the Olympic Football 50p still holds onto its place in second spot.

We’ve seen a bit of a shuffle amongst the Olympic Judo, Wrestling and Triathlon 50p coins, with Judo now retaking its place as the third scarcest 50p in circulation, following its fall 2 places on the previous index.

Towards the bottom of the index, we’ve seen the Team GB 50p move up 9 places, which has caused many of the lower scoring coins to move down 1 or 2 places, although our bottom 3 coins remain unchanged since the previous index.

The Girl Guides 50p has also seen a rise in scarcity, jumping 7 places up the index.

As the 2018 50p coins have now been found in circulation and are being swapped on the Change Checker App, we look forward to adding them to the Scarcity Index once mintage figures are confirmed. 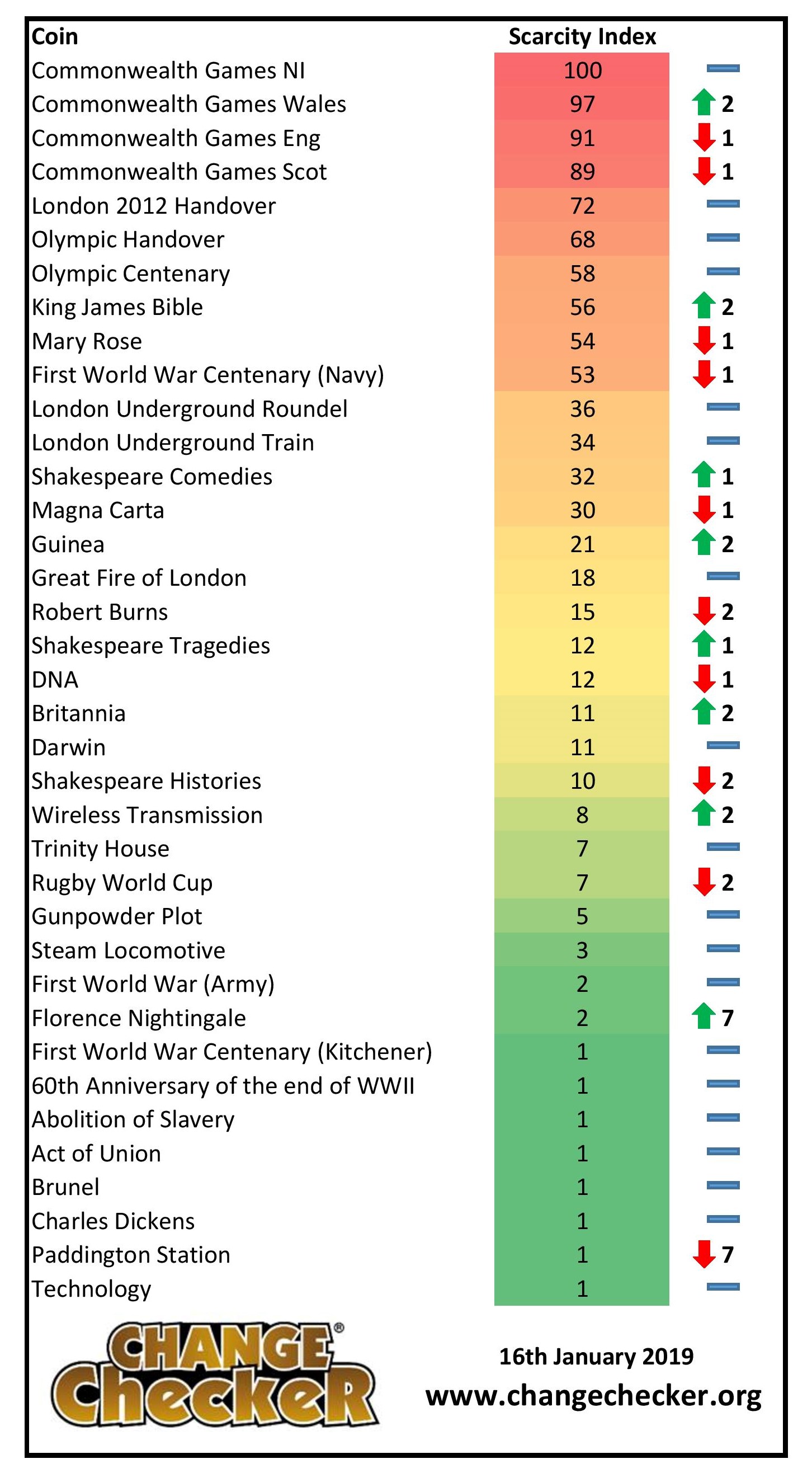 We’ve seen minimal changes on the £2 Scarcity Index, possibly due to the fact that the 2017 coins have not yet been released into circulation.

There has been a small shuffle amongst the Commonwealth Games £2 coins, however these coins remain the scarcest of the UK £2 coins in circulation due to their incredibly low mintage figures.

Whilst a few coins have moved 1 or 2 places on the index, the majority of £2 coins seem to have held on to their rating since the last update to the index, but it will be interesting to see what changes occur for the next update.

How your Scarcity Index works

You can use the 6 point guide to help you determine a more realistic value for your coins.