At these beaches, the largest amphibious assault in history was launched and this attack paved the way for the liberation of German-occupied France and is largely considered the start of the victory on the Western Front.

Most UK collectors will be familiar with the United Kingdom 75th Anniversary of D-Day £2 coin issued in 2019 to commemorate the historic event. However, Allied Nations across the globe have been commemorating this important anniversary with unique coin issues from their very own Mints.

Today, we will be looking at the extraordinary coins issued by Australia, Canada and Belgium, in addition to the UK £2, that have been brought together in a strictly limited presentation pack.

Over sixty-one thousand British Troops were deployed as part of the D-Day Operations, landing on the 6th June at Gold and Sword. What’s more, by 1944 over 2 million troops from over 12 countries were in Britain in preparation for the invasion.

To commemorate Britain’s great effort in opening up this second front against the German army, The Royal Mint issued a United Kingdom £2 coin for 2019.

This coin was produced in collaboration with Imperial War Museums and was designed by Stephen Taylor. Speaking about his work on the design, Taylor emphasises that he wanted to ‘build up the scale of the operation’ and that the ‘fonts are inspired by markings on US, Canadian and British landing craft, capturing the spirit of the international cooperation.’

Operating within the British command structure, Canadian troops provided the third largest force for Allied operations in Western Europe. Landing at Juno, between British troops at Gold and Sword, over 21,000 Canadian troops were involved in the D-Day Landings.

The Canadians played a crucial role in the action that effectively ended the Normandy campaign a few months later, cutting off German forces at the Falaise gap.

To commemorate such a huge achievement, The Royal Canadian Mint issued a $2 coin, following their proud tradition of honouring Canada’s rich military history with commemorative $2 coins.

The design, by Alan Daniel, features unique touches of selective colour to honour this most special anniversary.

On D-Day, over 2,000 Australian airmen took part in the battle of the skies above the invasion beaches, in addition to 500 Australian sailors serving in the escort fleets.

Notably, Australian officers held places in various British units throughout the campaign, gaining experience of British practises which they could then take home after the war.

Designed by Bronwyn King, the intricate design on this Australian $1 shows a flight of planes all heading in a single direction, with an Australian Kangaroo featured at the bottom.

Although there are few recorded Belgium troops on 6th June D-Day Landings, Belgium soldiers played a key part in the Battle of Normandy, which followed the initial D-Day Landings operation.

What many people also don’t know is that the exiled Belgium government in the UK raised its own units in Britain, and Belgium pilots flew in the RAF.

Designed by Luc Luycx, this remarkable 5 euro features a map of Normandy with arrows pointing across to the beaches where troops landed on D-Day. The reverse of the coin shows a map of Europe with ‘Belgium’ in the country’s three languages: French, Dutch and German.

A total of 156,000 Allied Troops took part in the D-Day Landings from across 12 countries – it truly was an international effort!

To commemorate this most important anniversary year, Change Checker have brought together these four remarkable coins from four world-renowned Mints to create the Change Checker 75th Anniversary of D-Day Allied Nations Coin Pack.

To add one to your collection and commemorate the international troops who fought in D-Day, click here >> 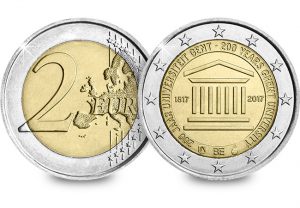 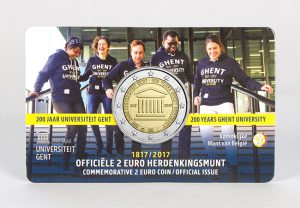