Sure, this can be an annoyance as technically the coins are not legal tender in the UK, but from a collecting point of view, new and interesting designs are always a bonus!

In our latest coin hunt competition, we went head to head with 10 YouTube Coin Hunters for a 50p coin hunt and it was amazing to see how many of the teams stumbled across coins that shouldn’t be in our change…

Here are some of the unexpected coins we came across:

Yasmin and I were lucky enough to come across this 2012 Bailiwick of Jersey 50p in our coin hunt.

The coin features Jersey’s Grosnez Castle on the reverse surrounded by the lettering ‘Bailiwick of Jersey’. The obverse features the Arnold Machin engraving of Queen Elizabeth II.

Jersey’s coinage is not legal tender in the rest of the UK, but the lower mintage figures of the island’s coins compared to the UK makes them particularly scarce and collectible, so it was a great surprise to find a Jersey coin amongst our 50ps!

Jersey’s coin mintages are significantly lower because of their smaller population of only 100,000.

During his coin hunt, Christopher Collects managed to find a 2012 Freesia Flowers coin from Guernsey.

This beautiful 50p features two crossed freesia flowers on the reverse design, however it is the obverse design which is particularly special.

The obverse features Raphael Maklouf’s portrait of Queen Elizabeth II with the lettering ‘Bailiwick of Guernsey’ above, and also a small Guernsey Coat of Arms to the left.

We don’t know the mintage figures for this coin, however it will likely be fairly low when compared to UK figures, due to Guernsey’s smaller population.

Coin Cupboard was very lucky and also found a Bailiwick of Jersey 50p, as well as an Imperial State Crown 50p from the Isle of Man.

The Imperial State Crown 50p was issued in 2018 as part of a five coin set celebrating the Sapphire Coronation Anniversary of Her Majesty Queen Elizabeth II.

A limited number of each coin entered circulation on the Isle of Man, although we don’t know the exact mintage figure for this coin.

The reverse design shows the Coronation Crown and the obverse features Jody Clark’s most recent portrait of the Queen which, unlike UK coins, includes her shoulders.

Whilst you might expect a few British Isles coins to turn up every now and again, we certainly weren’t expecting to find this coin in our 50p bank bag!

In fact, both team Change Checker and Dom Collects came across one of these unusual coins in our change.

This 1 dollar was issued from 1989 to 2000 in the Eastern Caribbean States, but how did it find its way into our UK change?

As a British Overseas Territory, the East Caribbean States currency features the portrait of Her Majesty Queen Elizabeth II on the obverse.

This, along with the coin’s size which is very close to the UK 50p, means it has managed to get mixed up with UK change and passed off as a 50p.

However, there is one very significant difference between this coin and a 50p, and that’s the shape. The East Caribbean States dollar is actually decagonal (10 sided) and features milling along every other edge of the coin.

You can imagine just how surprising it was to come across this coin in the middle of our 50p hunt, and how unusual still that we weren’t the only team to find one!

It just goes to show how many fascinating coins find their way into our change and why it’s always worthing checking to see if you’ve found a coin which was intended for circulation in the UK.

You can now secure the Guernsey Freesia Flowers 50p for your British Isles collection.

Have you heard about the Change Checker Community?

At the start of this year, we created a Facebook group for like-minded change collectors to share, learn & swap with one another, as well as providing a forum for discussion to stay up to date with all the latest from the world of coin collecting.

It’s been great to see so many of you become active members of the Community and I hope you’re enjoying the experience of using our Facebook group.

When it comes to swapping, the Community has become a great tool to help collectors build their collection.

You can find the Change Checker Community by searching for us on Facebook, or by looking on the left hand side of our main Change Checker Facebook page and going to ‘Groups’:

Our excellent team of group moderators made up of avid Change Checkers – Candice Clews, Claire Wade and Ivan Dinev – are on hand to help with any questions you might have about the group, and I’ll be there too if you want to say hi!

I look forward to seeing you there!

We would love for you to join the group and be a part of the community, so click here to visit our Facebook group and join today >>

There’s been some exciting news for 10p coin hunters today, as The Royal Mint has announced that 2.1 million new 2019 dated A-Z of Great Britain 10p coins will be released into circulation from today.

Since the initial surprise release of 2.6 million quintessentially British themed 10p coins back in March 2018, the British public have been head over heels for these wonderful little coins and yet, despite another 2.6 million A-Z 10ps entering circulation last year, they still remain incredibly hard to come across in your everyday change.

In fact, a question I’m asked most days by Change Checkers is ‘Where are all the A-Z 10ps?’

We’ve even held our own Change Checker live events to help collectors kick start their collection, as the coins are proving so hard to find.

Whilst there are 5.2 million A-Z 10p coins in circulation, we can assume that there are 200,000 coins per design, which actually makes each individual coin rarer than the UK’s scarcest 50p, the Kew Gardens.

However, we have noticed more Change Checkers adding these coins to their collection, and based on this data we’ve been able to put together an A-Z 10p Scarcity Index to show you which coins are currently most sought-after. 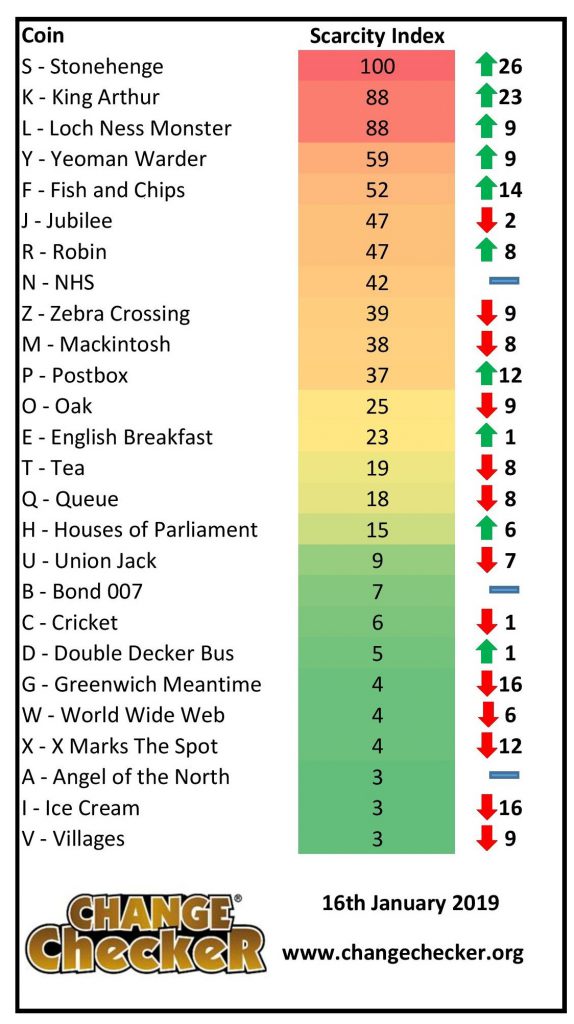 Now that The Royal Mint will be releasing a further 2.1 million coins in to circulation, chances are that more collectors are likely to come across these coins

I for one am certainly incredibly excited about the chance to find these coins in my change and build up the whole collection from A-Z and there will of course be collectors looking to complete a set of both year dates. 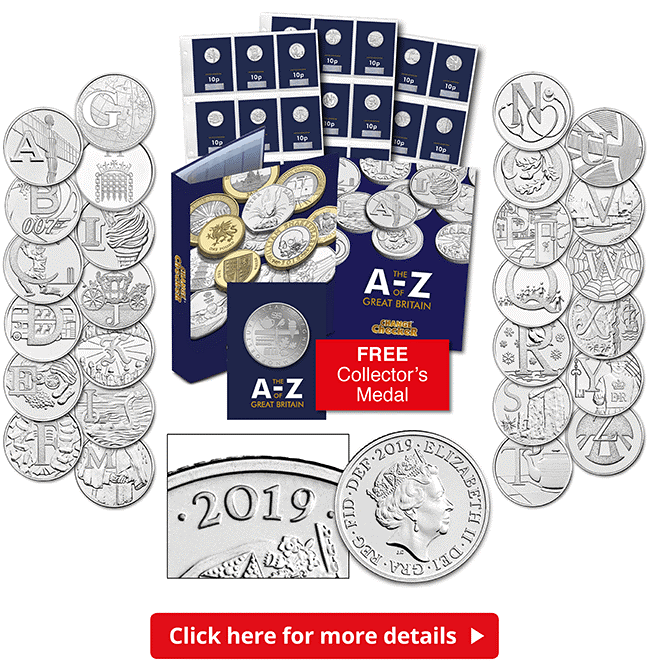