Have you the story behind the Cartwheel Pennies? Not only are they the heaviest and largest coins ever issued for circulation, they were also issued for ONE-YEAR-ONLY.

Throughout the 18th century silver prices increased, which resulted in a substantial decrease in the amount of silver pennies that were being minted. This led to a lack of small change and businesses were finding it difficult to pay their employees with the current coinage.

Subsequently, a trend began where independent Mints started striking copper half penny and penny tokens. Most of these tokens were being minted at the ‘Soho Mint’ in Birmingham, which was actually the very first Mint to be powered by Steam.

Whilst this was not legitimate money it solved the issue and it took off – companies all over Britain were ordering personalised tokens. 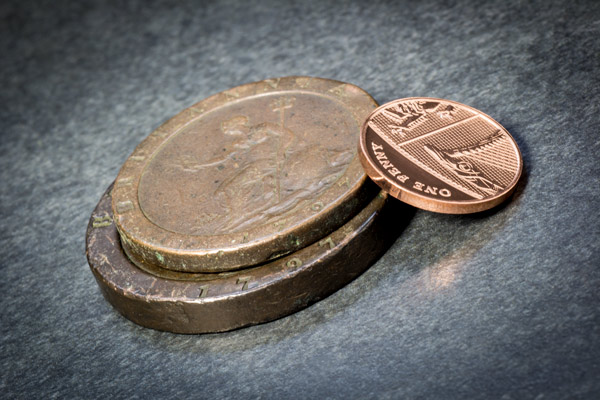 However, the ‘solution’ meant there was a problem…

The coins were large! In fact, the 1 pence weighed an incredible 1oz and the 2 pence weighed 2oz – that’s the same weight as a Mars Bar and almost 8 times heavier than the current 1p and 2p coins. At that size, it’s hard to believe these ever jangled in the pocket of our ancestors!

The coins weighed so much because they were struck in pure copper and their intrinsic value corresponded to their actual face value. Their design was simple – a portrait of the monarch at the time, King George III on the obverse and Britannia on the reverse.

The dramatic size of these coins and their unusually wide raised rim is why they became known as ‘Cartwheel’ pennies. 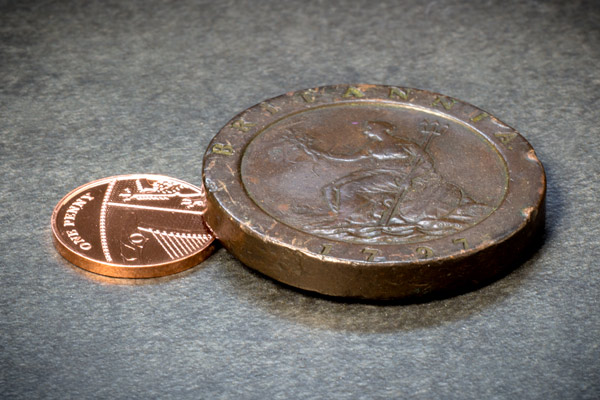 The modern 1p coin compared to the 2oz 2p coin

The ‘Cartwheel’ pennies were designed this way to prevent counterfeiting, but their size and weight made them cumbersome and unwieldy. They were immediately unpopular with the public as people didn’t like carrying them around – the two-pence was an INCH and three-quarters in diameter and a quarter inch thick. There were soon calls for them to be discontinued and shortly after, the coins were redesigned.

Due to the rise in the price of copper, the intrinsic value of the coins soon exceeded their face value and subsequently the majority of these coins were melted down.

This meant, the coins were issued for one-year-only, which automatically makes them two of the must-have modern coins and key coins in any British collection. 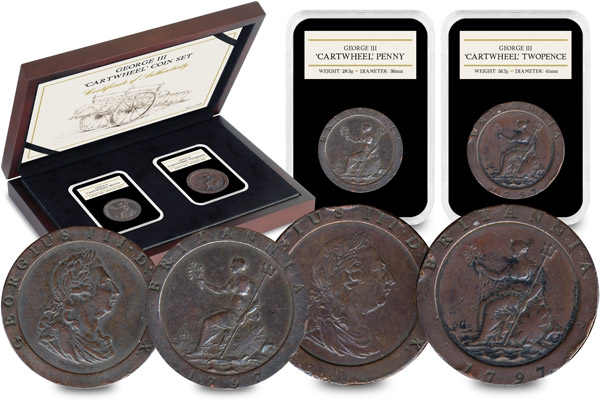 We have secured a small number of sets containing the original 200 year old ‘Cartwheel’ coins – the two pence and the penny. They come presented in a deluxe presentation case with an accompanying Certificate of Authenticity. They really are key must-have coins in any British collection.