2020 marks the 75 years since the end of the Second World War and in commemoration this brand new UK £5 coin has been issued, honouring the struggles and sacrifices made to achieve lasting peace.

Designers Matt Dent and Christian Davies have included the words ‘WAR’ and ‘PEACE’ on the reverse of this coin. This brand new £5 coin’s design was said to be inspired by stone war memorials, paying tribute to the millions of lives lost during the six years of conflict.

To mark this special anniversary, this £5 coin has been issued in a number of different specifications, including Brilliant Uncirculated quality for just £10.99 (+p&p).

Victory in Europe and Japan

Whilst Victory in Europe (VE) Day in May 1945 marked the start of the end of the war, in the Far East, Japan was yet to be defeated and the war raged on for three more months.

Atomic bombs were used by American forces, which largely destroyed the cities of Hiroshima and Nagasaki on August 6th and 9th and left devastating effects of nuclear radiation for decades to come.

Although he never used the word ‘surrender’, the Japanese emperor Hirohito announced on the 15th August 1945, that he had told his government to accept the demands of the Allies and thus, over Asia and the Pacific, Japanese troops began to lay down their weapons.

This announcement marked the official end to the Second World War for all countries and nations involved.

To celebrate the 75th anniversary of this day and the end of the Second World War, The Royal Mint have issued this brand new £5 coin to preserve the history of this momentous day for generations to come.

Issued by The Royal Mint, this 2020 VE Day £2 features a woman holding a newspaper aloft in a crowd of celebrating people, set against a backdrop of the word VICTORY.

2020 marks a particularly poignant anniversary as we celebrate 75 years since Victory in Europe Day. Many celebrations had been scheduled to mark this joyous occasion, including rescheduling the Early May Bank Holiday to the 8th, but were not able to take place due to the pandemic.

In place of the big parties that were planned, people took to their doorsteps to sing and raise a glass over their fence with their neighbours!

The edge inscription of this coin reads ‘JUST TRIUMPH AND PROUD SORROW’ which is incredibly fitting for a coin which marks such a historic anniversary.

D-Day was the largest seaborne invasion in history. It took place on 6th June 1944 and began the liberation of German-occupied France during WWII, laying the foundations of the Allied victory.

Designed by renowned Royal Mint engraver, Stephen Taylor, this coin was issued in 2019 to mark the 75th anniversary of the D-Day landings. It features arrows each pointing across the English Channel to Normandy. Each arrow also has one of the code names used for each of the beaches where Allied troops landed – Utah, Omaha, Gold, Juno, and Sword.

This £2 coin is a timeless tribute to the thousands of Allied troops who fought tirelessly and sacrificed their lives to make the Normandy landings a success.

Ultimately it was a decisive victory for the RAF and Britain, and crucially it was the first time Germany had faced defeat in World War Two. The reverse design of this commemorative 50p depicts three airmen scrambling towards their planes.

In 2018, to commemorate the 100th anniversary of this significant victory, The Royal mint issued this £2 coin. It was issued as part of a commemorative £2 coin series from 2014-2018 to mark the centenary of the First World War.

The reverse was designed by Stephen Raw and features the words ‘The truth untold, the pity of war’, from the Wilfred Owen poem Strange Meeting. The words stand out on a mud-like background in the centre of the £2.

In 2018, a series of £2 coins were issued, including the coin pictured above, commemorating the centenary of the RAF’s establishment.

Each stunning design features an iconic RAF aircraft, from the modern F35 Lightning to the famous Spitfire, with the first coin in the series being this £2 coin, which celebrates the Royal Air Force as a whole.

The reverse features a design by Rhys Morgan of the Badge of the RAF – an eagle flies in front of a circle inscribed with the official motto ‘Per Ardua Ad Astra’, which is Latin for ‘Through adversity to the stars’, with the Imperial Crown at the top.

If the popularity of previous military themed coins is anything to go by, we’re expecting this brand new £5 coin to be a firm favourite with collectors!

What’s your favourite military coin that you have in your collection? Let us know in the comments below.

As many collectors will know, 2019 marks the 50th Anniversary of the 50p coin.

Since its issue in 1969, the world’s first seven-sided coin has become a huge favourite with collectors and has served as a canvas to commemorate some of the most iconic moments in British Military history.

As we mark a milestone year for this iconic coin, The Royal Mint’s celebration continues as they reissue five of the most important 50p coins celebrating British Military history!

These five 50p coins, pieced together for the first time, mark a rare milestone moment for British Coinage. Not to mention the set also includes the 1994 D-Day 50p re-issued in the NEW 50p specifications for the first time ever!

Earlier in the year, the Base Proof, Silver Proof and Gold Proof British Culture 50p sets sold-out within just TWO HOURS of going on sale. The Brilliant Uncirculated set released just a short while later also saw an overwhelming response from collectors.

This coin was originally issued in 2006 to mark the 150th Anniversary of the Victoria Cross.

Depicting the obverse and reverse of a Victoria Cross medal, the design by Claire Aldridge carefully details the Cross pattée with a crown and Lion as on the medal itself.

The Victoria Cross Award was introduced in 1856 by Queen Victoria to honour acts of the Crimean War.

Since then, two-thirds of all awards won have been presented by the British Monarch at investitures which are usually held at Buckingham Palace.

To date, the medal has been awarded 1,358 times. A large number of these were awarded during the World Wars: 634 in World War One and 182 awarded in World War Two.

The Battle of Hastings was fought on the 14th of October 1066 between the French Army, led by Duke William II, and the English Army led by King Harold.

King Harold was eventually defeated by William who then became known as William the Conqueror; he was crowned the first Norman King of Great Britain.

Issued in 2016 to mark 950 years since this legendary battle, the reverse design of this 50p by John Bergdahl was inspired by the Bayeux Tapestry.

The Battle of Britain was an intense air battle fought mainly throughout the summer of 1940 between Germany and Britain.

The name for the conflict was derived from a Winston Churchill speech in which he said “The Battle of France is over. I expect the Battle of Britain is about to begin.”

Marking the 70th Anniversary of the Battle of Britain this coin was first issued in 2015. The reverse design, by Gary Breeze, depicts three airmen running to their planes with enemy aircraft overhead.

On 6th June 1944 a mighty alliance of British, American and Commonwealth armed forces crossed from England to Normandy and began assault on German forces.

It was the largest seaborne invasion in history and began the liberation of German-occupied France, laying the foundations for the Allied victory of World War Two.

A timeless tribute to the thousands of Allied troops who fought tirelessly in the War, this 50p coin was issued in 1994 to commemorate 50 years since D-Day.

Originally struck as a large 50p in the pre-1997 specifications this is the first time ever this D-Day 50p coin has been issued in the new 50p dimensions!

The reverse of the coin was designed by John Mills and represents the D-Day Landings with the Allied invasion force heading for Normandy filling the sea and sky.

We are very excited to see these coins being re-issued as a complete set for the first time – especially the 1994 D-Day 50p in the new specifications!

Following the popularity of the re-issued British Culture 50p set earlier in the year, we expect this set to be equally as sought-after.

What coin are you most looking forward to seeing?

Thank you to everyone who voted for their favourite of the new 2015 coin designs in our recent poll. Thousands of you participated and it was a very close call between the three circulation coins, but in the end the First World War Royal Navy £2 just edged out the Battle of Britain 50p as the most popular design. 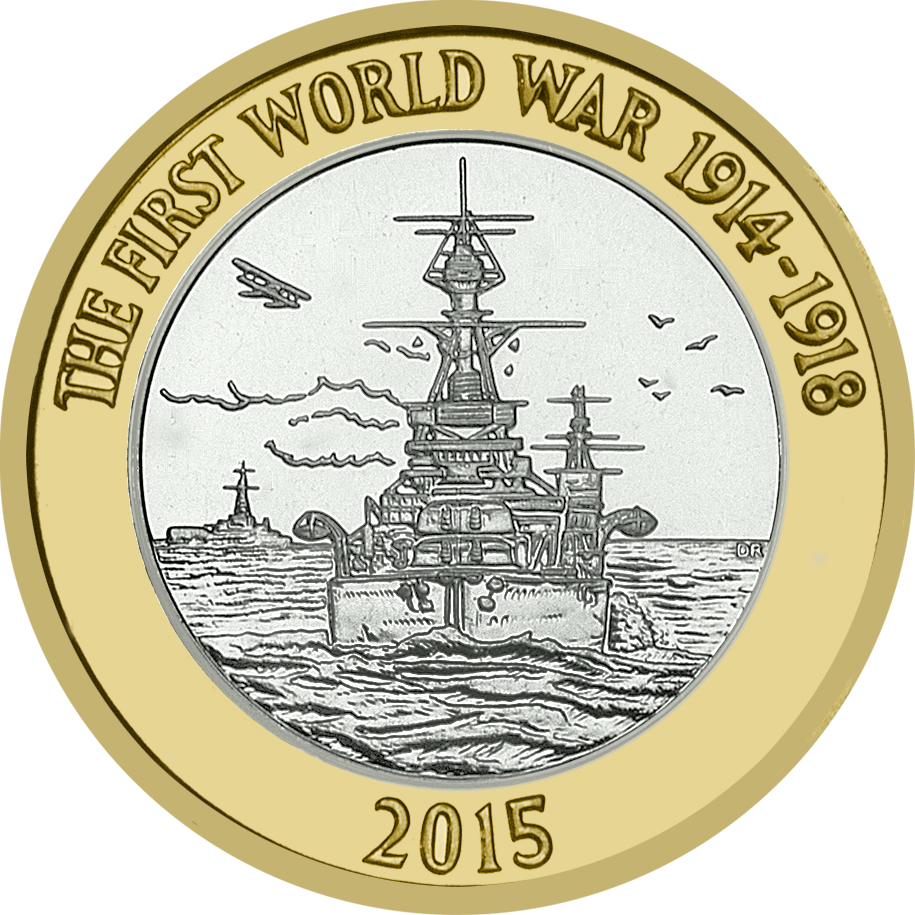 Change Checkers voted the Royal Navy £2 as their facourite

The coin (pictured here) is the second design in the Royal Mint’s five year programme commemorating the centenary of the First World War.

The British Royal Navy was by far the best in the world at the time of outbreak in 1914, and offered a formidable defence of British coastal waters throughout the war.

The reverse design by renowned military artist David Rowlands features the imposing image of a First World War Navy battleship approaching on the open sea with the anniversary dates around the outside.

It remains to be seen when exactly the three 2015 coins will be making their way into general circulation next year, but we are already looking forward to finding them! 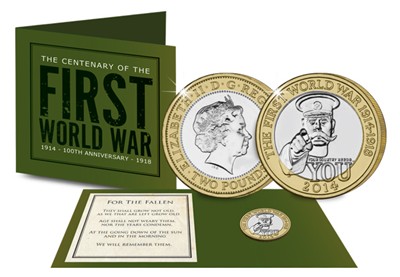