ENTRIES TO THE ‘BRONZE 20P’ DRAW ARE NOW CLOSED

We love to hear when Change Checkers make a great coin discovery. We’re often contacted about mis-strikes which are interesting oddities but what really excites us are ‘error’ coins.

Genuine ‘error’ coins, especially those verified by The Royal Mint, are VERY rare and finding one is a goal for many change collectors.

So imagine our excitement when somebody contacted us after finding one of the rarest ‘error’ coins yet!

Earlier this year, we were contacted by a collector named David Crosier who informed us he’d found a very rare ‘error’ coin.

A collector for over 50 years, David told us how he’d often look out for mis-strikes and ‘mules’ but there was something special about this particular coin. Initially he presumed the coin was plated but decided to send it to The Royal Mint to be certain. 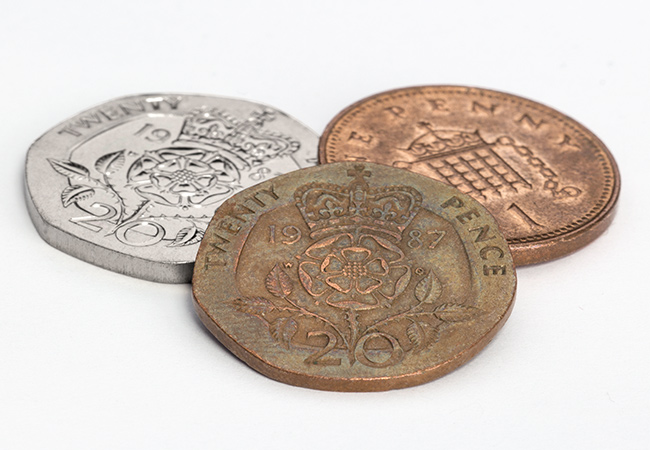 After examination by x-ray fluorescence spectrometry, the coin was confirmed by The Royal Mint as an extremely sought-after minting ‘error’.

Somehow a 1p ‘blank’ found its way into the presses and a 20p was accidentally struck onto it.

The ‘Bronze 20p’ is significantly thinner than he standard 20p coin

Errors like this are extremely rare, in fact so rare we’ve never heard of another ‘Bronze 20p’, but The Royal Mint verified the authenticity of the coin with a letter and so here at Change Checker we knew this was an opportunity not to be missed. 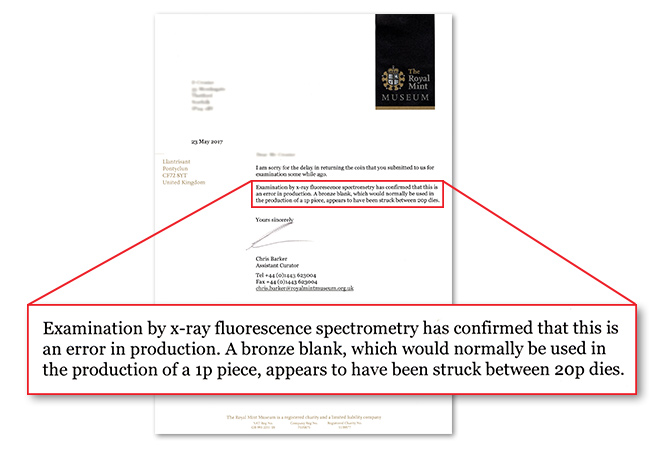 Now the great news… we want to give away the amazing ‘Bronze 20p’ to one lucky Change Checker! 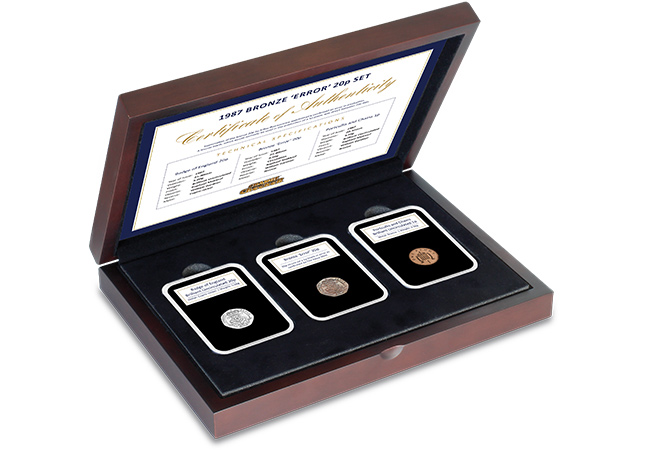 The ‘Bronze 20p’ is housed in a specially designed presentation box alongside a Brilliant Uncirculated 20p and 1p coin from the same year.

Your chance to win the coin

We’ll be selecting a lucky Change Checker to win this coin.  If you’re already registered then we’ll automatically include you in the draw.

To register your free account, all you need to do is enter your email address and choose a password.

ENTRIES FOR THE ‘BRONZE 20P’ DRAW ARE NOW CLOSED

In 2017, following reports by Change Checker and in the national press that a die mix up at The Royal Mint resulted in a number of 12 sided £1 coins being struck with dual-dates,  The Royal Mint officially confirmed the error.

However, this is one of the hardest errors ever to spot. That’s because even with 20/20 eyesight you will struggle to see the incorrect date on the coin’s reverse because it’s micro-engraved as part of the coin’s ultra-secure finish.

The error is so small, it cannot be seen with the naked eye.

What do I need to look for?

Firstly, although both 2016 and 2017 obverse-dated £1 coins entered circulation in April 2017, the die-error mix up appears to have only occurred on a limited number of coins with a 2016 date on the Queen’s head side.

So it’s worth checking any 2016 coins. You’ll need to look just inside the rim of the design-side of the coin, where you will see some tiny writing. You’ll almost certainly need a Microscope or Phonescope to properly see the writing, which should reveal the date.

You’re looking for a 2016 obverse-dated coin with 2017 micro-engraving on the reverse.

The Phonescope allows you to see tiny details on coins

What if I can’t read the micro-engraving?

With over 1.5 billion new £1 coins being struck not all coins are finished perfectly. Unfortunately, a poorly struck example where you cannot read the micro-engraving is not of great interest to collectors.

What about other £1 mis-strikes and errors?

We believe this is the only known £1 error. Due to the huge number of coins that have entered circulation, there are a number of interesting mis-strikes, which, although numismatically interesting, have relatively limited collectibility or value.

More worryingly, there are a number of altered £1 coins for sale, claiming to have misaligned heads or similar unusual errors. However, both these are likely to have transgressed the Coinage Act by tampering with the coin and are clear minting impossibilities. STEER WELL CLEAR is our advice. Similarly beware of photographs that purport to show a genuine Dual-dated £1 coin – you need to be confident you’re not simply looking at two different coins.

So what is the Dual-dated £1 Coin worth?

This remains the most difficult question but let’s take a look at the available information.

The Royal Mint has given no indication of how many Dual-dated £1 Coins ever went into circulation – and it’s quite likely they do not even know. We have not seen any examples amongst our stock. Equally, 1,500,000,000 2016 £1 coins were struck and rates of 1,800 coins per minute were achieved at the height of production.

The key to any valuation is what comparable coins sell for. The most obvious comparable is the 2008 undated 20p, which was caused by a similar die mix up. That sells online for between £50 and £80.

Other interesting UK errors include “Silver” 2p coins, which have sold in recent years for as much as £1,400 but these are considerably rarer relying on a few old 10p blanks being left over when a blank barrel has been filled with new 2p blanks. Another 2 pence error, when some DATE 2p pieces were struck using the old decimalisation dies with the word “NEW” in front of “PENCE”, currently sells for around £60.

We understand that at least one example was sold for £2,500 to a buyer in Spain in 2017, which probably marks the likely ceiling for value.

Probably more Dual-dated £1 coins have been struck than the 2p coins. However, the error is particularly difficult to spot due to the size of the micro-engraving. It’s also worth noting that interest in £1 coins is still very high and, of course, because they are relatively new in circulation, the chances of finding an all-important good quality version is high.

Bearing all that in mind, our best value estimate for a Dual-dated £1 Coin in excellent condition is currently £300 – £500.

Finding the coin in your change

We’ve heard from two Change Checkers lucky enough to find a dual dated error, one in October 2018 and one in April 2019.

I’m sure that the challenge of finding a dual dated £1 coin has sparked many Change Checker’s interest in collecting coins and I’m sure will encourage more collectors out there to look more closely at their £1 coins.

If you’ve come across an interesting coin in your change, be sure to get in touch with us. We’d love to hear about the rare coins you’ve found.