Rumours of the Dual-Dated £1 Coin appear to have been confirmed in the national press today.

Although we haven’t seen the coin ourselves, we’ve spoken to the collector claiming to be in possession of one and seen a number of images, leading us to believe that he has found a genuine error.

The error in question is a 12-sided £1 coin with two different dates – 2016 on the obverse and 2017 micro engraved on the reverse.

So, what everybody wants to know is, “what is this coin worth?”

At this stage it’s difficult to answer with any certainty. The error is very hard to spot with the naked eye and there is currently no indication as to how many of these error coins have been struck.

Probably the best example to compare it to is the 2008 undated 20p where there was an initial spike in interest and some coins sold for an inflated price in the thousands. However, this did settle down fairly quickly and today you’d expect to pick one of these up for between £50-75.

What is clear, is that this appears to be a genuine error and as such considerably more collectable than many of the mis-strikes and tampered with £1 coins that have recently appeared online.

Have you found a Dual-Dated £1 coin?

We’ll be keeping Change Checkers updated with the latest information on this Dual-Dated £1 Coin – sign up below for the latest updates.

Change Checker has just been able to confirm that a small number of “Inverted Effigy” £2 Coins have entered circulation.

First discovered by a Change Checker, and now confirmed as genuine by The Royal Mint, this unusual strike appears on a handful of the 2015 Britannia £2 Coins.

The result is that the Queen’s head is offset by around 150 degrees compared to the Britannia design on the reverse of the coin.

Just how rare is the Inverted Effigy £2 Britannia?

The Royal Mint is unable to give any indication of how many Inverted Effigy coins have entered circulation but we can make some initial estimates.

The first-year 2015 £2 Britannia is already one of the most-scarce circulating £2 coins ever issued with just 650,000 coins passing through banks and cash centres.  That already places it third equal in the all-time low mintage charts.

Of course, if the Inverted Effigy is a consequence of the die slipping during the striking process, it is possible that there may be other variations where the Queen’s head is less or more misaligned as the die has worked its way out of position.

Of course, given the many million coins The Royal Mint strike each year, it is to their immense credit that mis-strikes and errors are so few and far between.  But, of course, when they do arise, they cause great collector excitement, as some of these other examples pay testament to.

But there are a few myths out there too – upside down edge lettering, the “Pemember” Gunpowder Plot £2 coin and the “Necklace” £2 coin, which all have perfectly normal explanations.

But finally a note of caution.  I’m sure in time we’ll see some “examples” of the Inverted Effigy £2 for sale online.  Before you think of buying one, please beware.  Are you seeing a genuine Inverted Effigy or just a coin that someone has rotated in a photograph to make it look inverted?

Change Checker has just 24 Uncirculated Inverted Effigy £2 Britannia Coins.  If you would be interested in owning one of these coins, please leave your details below and we will contact you in due course with more information.

Please note we will only use this information to contact you about specifically about the Inverted Effigy £2 Coin.

Every keen collector knows that it is worthwhile paying close attention to the small details of your coins – it’s the only way you can ever hope to spot an error. However, it’s also important to know when you have a genuine rarity.

There are a few stories that crop up more often than others, so today I’d like to help dispel some of the myths about UK coins.

‘Errors’ like these can occur when blanks get mixed up or aren’t properly changed over when striking a new batch of coins.

This type of miss-strike isn’t very common but it can happen when coins are struck in the same year, like the 2013 London Underground £2 coins, where some were found with the incorrect edge inscriptions!

This unique 20p coin struck onto a 1p blank has been verified by The Royal Mint as a genuine coin and was also sent to ANACS (America’s oldest coin authentication and grading service) and confirmed to contain a mix of foreign metals to form a copper plated steel blank.

It’s the first of its kind seen by ANACS and experts have suggested it would fetch a minimum of £2,200 at auction.

In 2008, the reverse of each denomination from 1p to £1 was redesigned by Matthew Dent and so The Royal Mint produced a new die with the date on the obverse.

However, when the new Royal Shield 20p coins were struck for circulation, the old die was accidentally used. The Royal Mint confirmed that a batch of no more than 250,000 were issued with no date on either side of the coin.

A “mule” is a coin where one of the sides has been struck with the wrong die.  And that’s what happened with some of The Royal Mint’s 2014 Year of the Horse coins.

The Royal Mint acknowledged the error, which resulted in approximately 17,000 Britannia coins being struck with the non-denticled Year of the Horse obverse and 38,000 Year of the Horse coins with the denticled Britannia version as their obverse. At the time listings on eBay were as high as £500.

The 2015 dated ‘Silver’ 2 pence coin was dropped into a Royal British Legion collection tin in Wiltshire a few weeks ago and made headline news nationwide.

The coin was confirmed as an extremely sought-after minting error after a 10p ‘blank’ found its way into the presses and a 2p was accidentally struck onto it.

Errors like this are extremely rare, but The Royal Mint verified the authenticity of the coin. There has only ever been one other ‘silver’ 2p which sold in 2014 for £1,357.

In 2015, a small number of “Inverted Effigy” £2 Coins entered circulation with the Queen’s head rotated clockwise by approximately 150 degrees.

First discovered by a Change Checker, and later confirmed as genuine by The Royal Mint, this unusual strike appears on a handful of the 2015 Britannia £2 Coins.

The first-year 2015 £2 Britannia is already one of the most-scarce circulating £2 coins ever issued with just 650,000 coins passing through banks and cash centres.

Following reports by Change Checker and in the national press of dual dated 12 sided £1 coins, The Royal Mint has officially confirmed the error caused by a die mix up.

However, this is one of the hardest errors ever to spot because it’s incredibly difficult to see the micro-engraved date on the reverse.

It’s worth checking any 2016 coins just inside the rim of the design-side of the coin, where you will see some tiny writing. You’ll almost certainly need a Microscope or Phonescope to properly see the writing, which should reveal the date. You’re looking for a 2016 obverse-dated coin with 2017 micro-engraving on the reverse.

The Royal Mint has given no indication of how many Dual-dated £1 Coins ever went into circulation – and it’s quite likely they do not even know. This makes it difficult to put a value on the coin, but we understand that at least one example was sold for £2,500 to a buyer in Spain in 2017, which probably marks the likely ceiling for value.

There is a misconception that there were two types of the Abolition of Slavery £2 coin struck for circulation. It is true that two versions of the coins exist– one has a textured finish whereas the other has a smooth finish and features the artist, David Gentleman’s initials (circled).

The key difference is that only the textured version was struck for circulation, and if you find one of the smoother types in your change, you have actually found a coin which has been taken out of a presentation pack. This makes it considerably rarer than the circulating version, so it is worth keeping rather than spending!

The 2005 Gunpowder Plot £2 commemorates the 400th anniversary of Guy Fawkes’ failed assassination attempt on King James I, but the coin is more familiar to collectors for having a spelling mistake in the edge inscription.

The timeless quote “Remember, remember the fifth of November” has been found with various combinations of Pemember, Pemembep, Novemebep and so on. The common factor here is the ‘R’ which appears as a ‘P’.

Sadly for collectors this is apparently not a striking error. The explanation from The Royal Mint is that the down-stroke of the R coincides with the milling around the edge, and as the coin has worn over time, the letter has become less defined.

This categorical statement from the Mint means that any mark-up in price for a supposed ‘error’ is completely unjustified, and although it makes the coin more interesting, it is not the mistake which it is often perceived to be.

The Battle of Britain 50p with no denomination

The Brilliant Uncirculated 50p was issued early in 2015 and was quickly dubbed an error coin. The coins, which were sold in presentation packs, had been struck without the denomination in either numbers or writing anywhere on the coin.

After the controversy surrounding the coin erupted, The Royal Mint confirmed that the 50p intended for circulation later on in the year would have the ’50 PENCE’ denomination.

Although this Battle of Britain 50p fails to feature a denomination on the Brilliant Uncirculated version and despite the fact that each obverse is different, The Royal Mint claim this was intentional and therefore is not an error.

More recently a story of a ‘rare £1 coin error’ surfaced after a round pound sold on the secondary market for £155. The supposed error was that the edge inscription “DECUS ET TUTAMEN” appeared upside down on the coin. So, in this case, it isn’t technically an error but rather a common mistake as a result of mass production.

It’s the little details like these that make collecting so interesting – and hopefully we’ve shed a bit more light on some of the most popular coin mis-strikes and myths in UK coinage. The minting process is never completely exempt from human error, so remember to always check your change carefully.  Mistakes happen, and when it comes to coins, these mistakes can often be worth a lot money to sharp-eyed collectors.

The ‘must have’ tool for Change Checkers 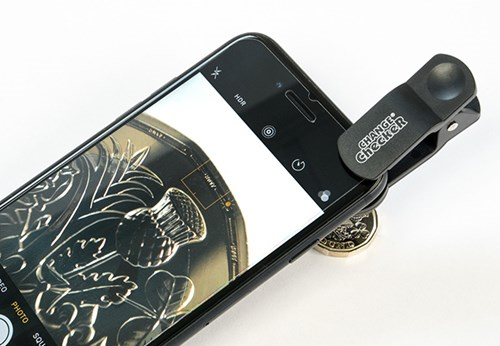 The Change Checker Phonescope works by clipping onto a mobile device and magnifying the camera, allowing you to see the incredible small details of coins and spot those hard to find errors!

It can also be used to take incredible photos and videos of coins up close.