They are identical in size, shape and weight to UK denominations (bar the new 12 sided £1) which means they often find their way into tills and vending machines undetected.

Mintage figures for British Isles coins are very hard to track down, but we’ve managed to get hold of the definitive mintage figures for Guernsey to show you which are the rarest coins you should be looking out for. 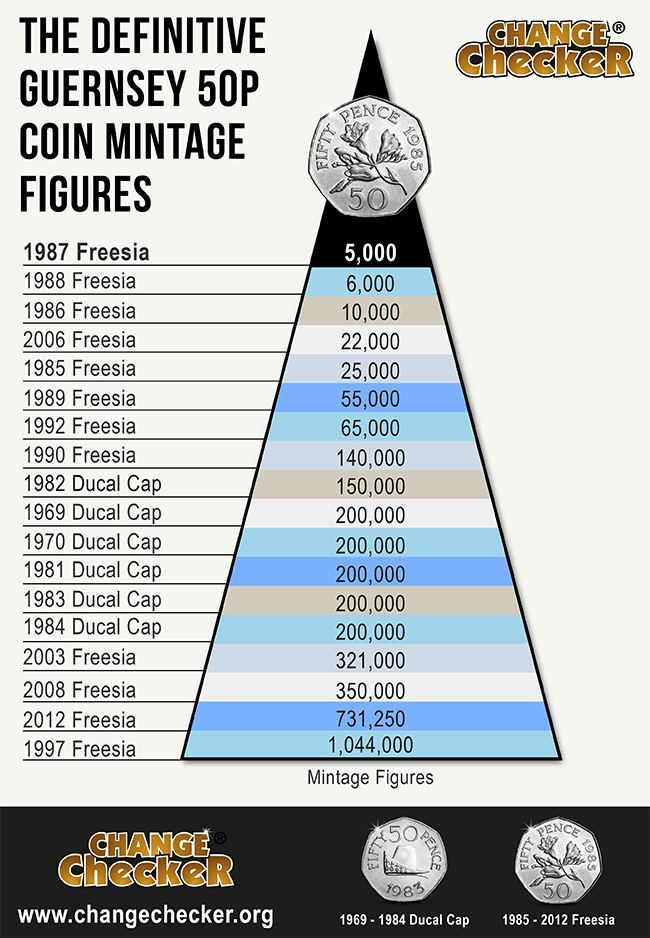 * These figures have been compiled from historic records in order to provide information to persons who inquire from time to time. All figures are provided as a matter of interest only and for no other purpose. It must be distinctly understood that the States of Guernsey nor its employees can accept responsibility for the accuracy of the figures or for the consequences of any errors or omissions and these figures are supplied under that understanding. [States of Guernsey]

Two different definitive 50p designs have been issued on Guernsey coinage between 1969 and 2012 – the Ducal Cap and Freesia 50p coins.

The coin features an image of the Ducal Cap of the Duke of Normandy on the reverse and the Guernsey Coat of Arms on the obverse, which includes three lions instead of Queen Elizabeth II’s portrait. This makes the 50p particularly distinguishable. 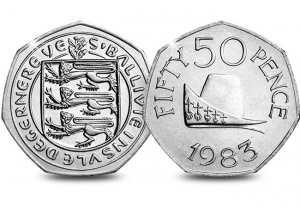 The Freesia 50p features the Guernsey Freesia Flowers on the reverse and the portrait of Queen Elizabeth II on the obverse. There is also a small Guernsey Coat of Arms on the obverse of the coin, which acts like a Guernsey mint mark and makes the Guernsey 50p stand out when compared to typical UK 50p coins. 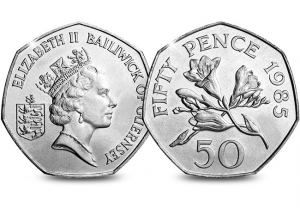 Mintage figures for the Freesia design vary considerably, with the rarest coin issued in 1987 actually only having a mintage of 5,000. Mintage figures for the UK Britannia 50p were also low in 1987, as this coin had a mintage of 88,659, whereas the definitive 50p is normally issued in the millions. However the Guernsey Freesia Flowers 50p is still over 17 times rarer than it’s UK counterpart for 1987. 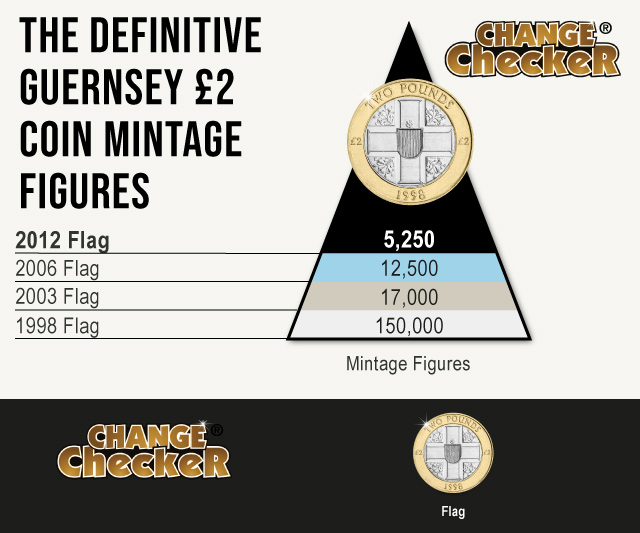 The first definitive Guernsey £2 coin design was actually dated 1997, but was only included in brilliant uncirculated and proof coin sets.

It was in 1998 that the first of the Guernsey £2 coins were issued in to general circulation, featuring the definitive Flag design. 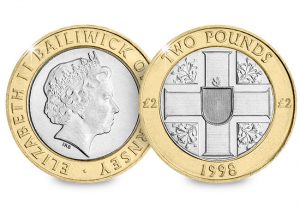 As the first year of issue for the first bi-metallic coin, you’d expect the mintage for this to be high, however only 150,000 of these coins were struck in 1998. This makes the 1998 £2 Guernsey’s most common definitive £2 in circulation, but when compared to the UK’s most common £2 (1998 Technology design) which had a mintage of 91,110,375, you realise just how rare these Guernsey coins really are!

This design has remained the same since its introduction, however the mintages figures for subsequent years were drastically lower, with the rarest coin being released in 2012 with a mintage of just 5,250. Comparatively, the UK’s definitive £2 coin (Technology design) issued in 2012 had a mintage of 3,900,000 – that’s over 700 times more than the definitive coins issued in Guernsey that year!

Although £2 coins were issued in Guernsey in 1991, 1993, 1994 and 1995, these were actually commemorative crown size coins, not issued for circulation and so we do not have these figures. At that time The Royal Mint manufactured Guernsey’s commemorative coins, creating a crown size denomination from the £2 coin. 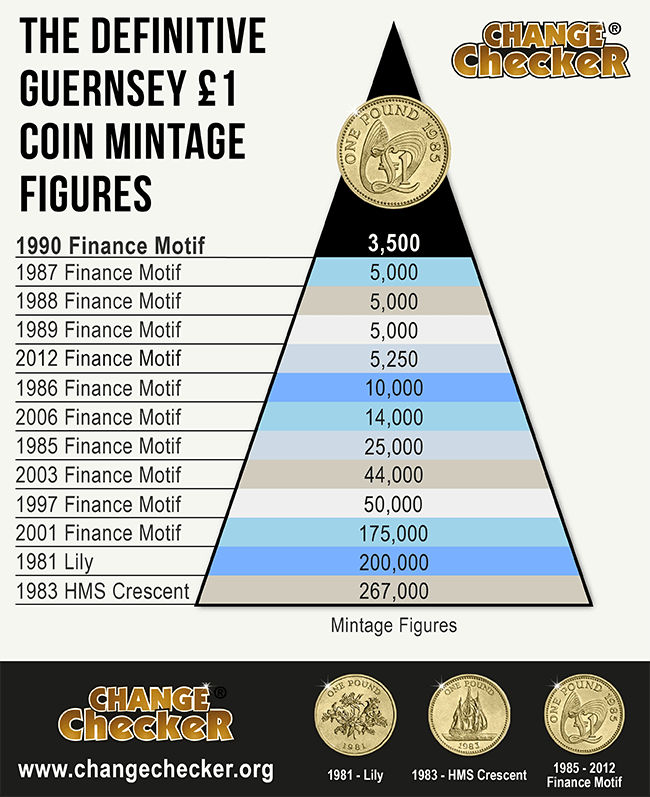 * These figures have been compiled from historic records in order to provide information to persons who inquire from time to time. All figures are provided as a matter of interest only and for no other purpose. It must be distinctly understood that the States of Guernsey nor its employees can accept responsibility for the accuracy of the figures or for the consequences of any errors or omissions and these figures are supplied under that understanding. [States of Guernsey]

Three different definitive £1 designs have been issued in Guernsey since 1981 – the Lily, HMS Crescent and Finance Motif.

As you can see from the chart above, the Finance Motif design issued from 1985 – 2012 has dramatically lower mintage figures and has been issued more frequently.

The coin features the finance motif on the reverse, but as with most Guernsey coins, it is the unusual obverse that makes it stand out. The obverse features the portrait of Her Majesty the Queen facing right, with a small Guernsey Coat of Arms on the left. 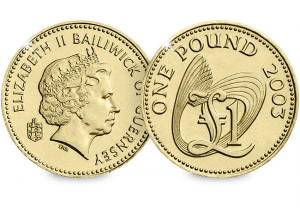 In 1981, Guernsey issued the Lily £1. Similar to the Ducal Cap 50p, the Lily £1 features the Guernsey Coat of Arms on the obverse, which includes three lions instead of Queen Elizabeth II’s portrait. The reverse of the design features a lily flower, the national flower of Guernsey. 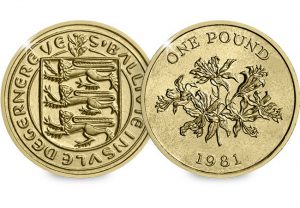 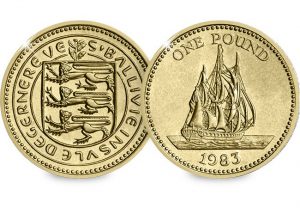 Although the 1981 Lily and 1983 HMS Crescent designs were only issued for one year each, they both have much higher mintage figures than the Finance Motif issued prior to these designs.

In fact, if you were to add up the mintages for every year the Finance Motif was issued (bar an unusually high year in 2001) the figure would still be lower than the 1981 Lily and 1983 HMS Crescent coins.

The rarest Guernsey £1 is the 1990 Finance Motif, with a mintage of just 3,500. We know that British Isles mintage figures are much lower than the UK due to the smaller population, however when you compare this to the rarest UK £1 which is the 2011 Edinburgh £1 with a mintage of 935,000, the difference is staggering! In fact, Guernsey’s rarest £1 is actually more than 250 times rarer than the Edinburgh £1!

From 2012 to present there have been no definitive coins released on Guernsey, and we must assume that this is due to the fact that there just isn’t the demand for them. As previously mentioned, the small population of just 62,307 means that there are less coins issued on the British Isles.

Has any Guernsey coinage found its way into your pocket and have you been lucky enough to find any of the rarer coins? Let us know in the comments below. 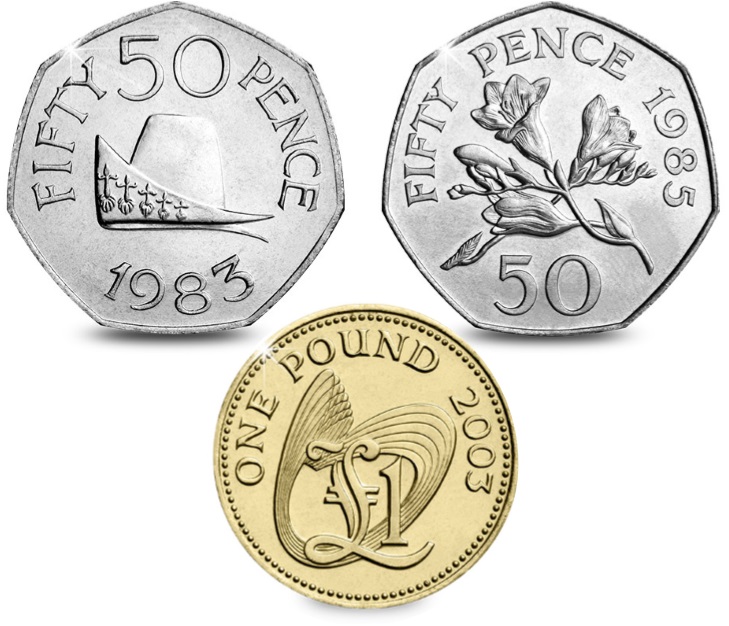 You can now order your very own coins from Guernsey to kick start your collection!