Over the weekend the design for the brand new Brexit 50p was released!

The final design features the inscription ‘Peace, prosperity and friendship with all nations’ and the historic date 31st January 2020 – the date the UK will officially leave the European Union.

It has also been confirmed the coin will be available as special commemorative Gold and Silver Proof editions, as well as in Brilliant Uncirculated quality, which be available from 31st January.

Chancellor Sajid Javid, who is Master of the Mint, was given the first batch of coins over the weekend to present one to Prime Minister Boris Johnson this week.

Excitingly, as part of the launch of the coin, The Royal Mint will open the doors of their South West Headquarters for 24 hours on 31st January to allow collectors to strike their own commemorative Brexit coins!

It has been reported that 3 million Brexit 50ps will enter circulation on the day the UK leaves the European Union – currently scheduled for 31st January 2020.

The coins are expected to detail the historic date underneath the inscription ‘Peace, prosperity and friendship with all nations’.

Prime Minister, Boris Johnson, is supposedly set to be one of the first people to get their hands on one on the day of release as he holds a special cabinet meeting at a venue in North England.

We don’t yet know where the 3 million or so 50p coins will enter circulation in the UK – this is likely to depend on demand from banks and cash houses – but we’re certain collectors will be keeping a keen eye out for these 50ps to add this historic coin to their collection!

It was revealed over the Christmas holidays that a new inscription will feature on the Brexit 50p coin to mark the revised date of the UK’s departure from the EU.

This update means that the previously planned inscription of ’31 October 2019’ will be substituted for ‘31 January 2020’.

Find out more about the Brexit 50p below:

Have you heard the news? It hit the headlines this morning that the Brexit 50p will enter circulation after the UK’s departure from the EU.

In October last year, Philip Hammond unveiled his plans for a Brexit 50p to mark the UK’s exit from the EU.

Whilst delays to Brexit meant the original 29th March 2019 dated coins did not go ahead, in August this year Chancellor Sajid Javid asked officials if it would be possible to produce Brexit 50p coins in time for Britain’s departure from the EU on the 31st October 2019.

And today it looks as though we have our answer, as The Treasury has confirmed that the coins have been given the go ahead and will be minted by Brexit day – despite the continued uncertainty of Britain leaving the EU by then.

So this begs the question, if Britain doesn’t leave the EU on the 31st October, could there potentially be millions of Brexit coins with the wrong date? It would certainly make for interesting collecting!

And the best news for collectors is that this coin will be entering circulation, although it is yet to be officially confirmed exactly how many or when we will start to see them in our change.

Rumour has it that 10 million Brexit 50ps could be produced, including Brilliant Uncirculated, Silver and Gold versions. This has not yet been confirmed by The Royal Mint, but has sparked great excitement in the collecting world.

As such a controversial issue, which has created much disruption across the UK and the EU since the referendum in June 2016, it is hoped that this new coin, which is expected to bear the phrase ‘Peace, prosperity and friendship with all nations’, will promote positivity surrounding Brexit.

To stay up to date with all the latest Brexit 50p news, sign up using the form below: 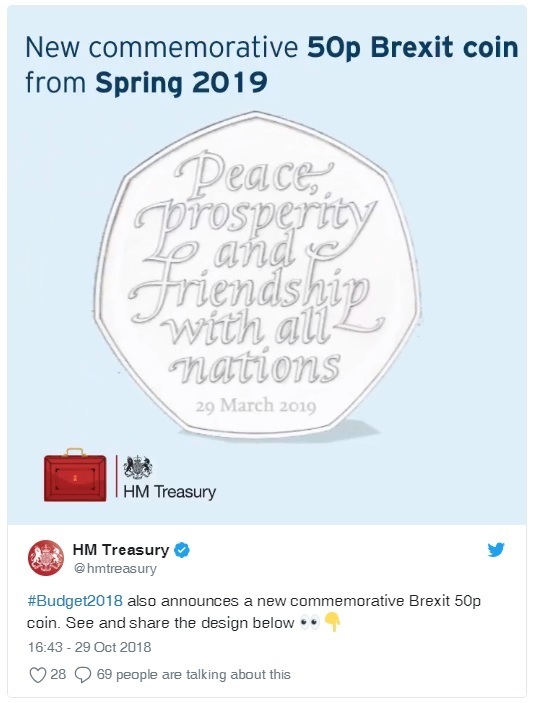 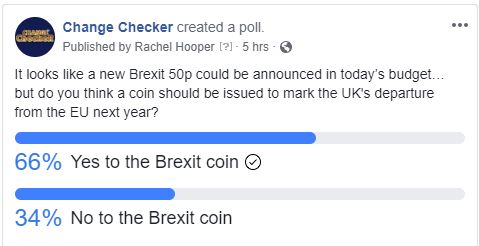 Have you heard the latest press rumours about the possibility of a commemorative Brexit coin being struck to mark the UK’s departure from the European Union?

In the news this week, we’ve heard that Conservative MPs are demanding the Treasury produce a ‘Brexit coin’ for 2019, but opinions seem to be split as to whether or not the coin should in fact be made.

Whilst the Treasury is believed to be enthusiastic about the plans, the Department for Business has reportedly rejected proposals for the Royal Mail to issue commemorative Brexit stamps.

In 1973 both a commemorative stamp and 50p coin were issued to mark the UK’s entry into the EEC, which was then incorporated into the EU in 1993. 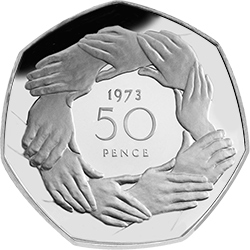 As Britain reaches such a significant moment in the country’s history, should stamps and coins be issued to celebrate this, or is the issue just too controversial a topic for our nation to memorialise?

Foreign Secretary Boris Johnson commented, “Leaving the European Union will be a monumental moment in British history, so let’s deliver a commemorative stamp that shows the world we’ve got Brexit licked.”

Despite this, the Royal Mail Director of Public Affairs and Policy has rejected the proposal for a commemorative ‘Brexit stamp’ on the grounds that the Royal Mail must remain a figure of political neutrality. 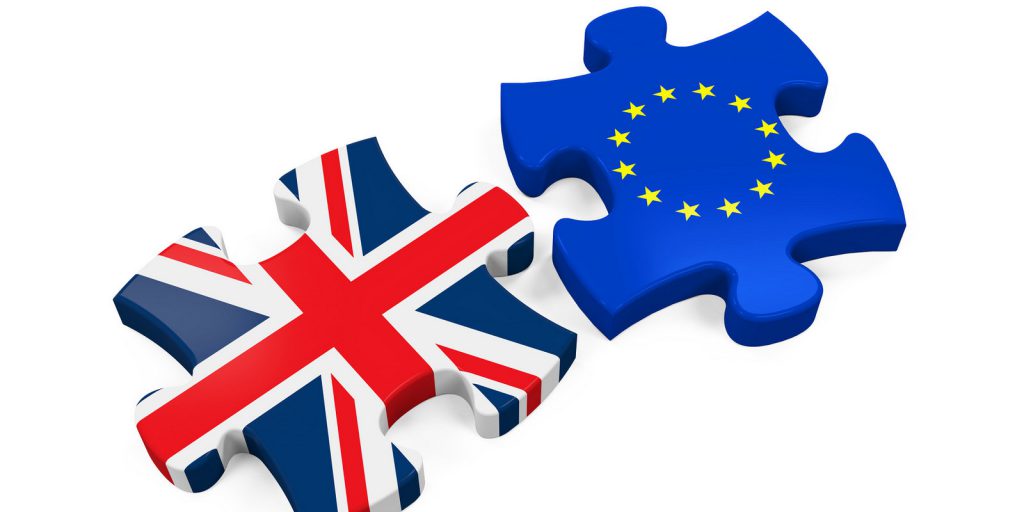 Nonetheless, Conservative MPs seem to remain ever hopeful that the plans for a commemorative Brexit coin will be granted.

The Royal Mint Advisory Committee will be deliberating on whether or not to grant approval for this proposal and if it is approved, the design will then be proposed to Chancellor Philip Hammond before being sent to the Queen for Royal approval.

In coming months, we may see a public petition and even a design competition for the coin, but will you be signing your name to support the production of this coin?

Results from our Facebook poll showed that 68% of you voted in favour of a commemorative Brexit coin. We shall see what the future holds for this coin as The Royal Mint Advisory Committee deliberates the proposal…