When it comes to coin collecting, whilst the thrill is in the find, it really is the icing on the cake when you manage to find a particularly rare coin which is worth more than its face value. However, all too often we are bombarded by press articles citing eBay listings of ‘rare’ or ‘error’ coins  and, naturally, our interest is piqued when we hear about the coin we’ve just come across in our change ‘selling for thousands’.

Unfortunately though, these articles can often sensationalise the actual value of the coin and when taken out of context we can forget that anyone can list anything they like on eBay, for whatever price they choose, regardless of whether or not the item is genuinely worth it.

So to help you avoid the pitfalls of buying coins eBay, we’ve created our top 5 eBay buying tips at the bottom of this blog.

When a coin is listed for excessive amounts it draws attention to itself and all it takes is for the press to pick up on it for more people to start believing that the coin really is valuable and so the story grows. But in reality, these coins are not usually worth the price they are listed for and are very unlikely to actually sell. Even if the coin does sell at that price, there is no guarantee that the sale will actually go through.

How much is my Benjamin Britten 50p worth?

There’s no doubt that the Benjamin Britten 50p was somewhat overlooked when it was first released and it is amongst the slightly more scarce coins in circulation, but ask yourself this… would you pay £800 for one?

Whilst a brilliant uncirculated quality Benjamin Britten 50p might sell for around £10, you’re likely to come across a circulation quality coin in your change, as this 50p has a mintage figure of 5,300,000 and is ranked as common on our scarcity index.

Read our blog ‘So i thought my coin was worth £800…’ for more information.

But it’s not just Benjamin Britten – there are others… including the 2005 Gunpowder Plot ‘Pemember’ £2 and the 2012 Charles Dickens ‘error coin’, as well as the new coin releases such as the leaked Paddington 50p…

The 2005 Gunpowder Plot £2 commemorates the 400th anniversary of Guy Fawkes’ failed assassination attempt on King James I, but the coin is more familiar to collectors for having a spelling mistake in the edge inscription. The timeless quote “Remember, remember the fifth of November” has been found with various combinations of Pemember, Pemembep, Novemebep and so on. The common factor here is the ‘R’ which appears as a ‘P’.

Sadly for collectors this is apparently not a striking error. The explanation from the Royal Mint is that the down-stroke of the R coincides with the milling around the edge, and as the coin has worn over time, the letter has become less defined. This categorical statement from the Mint means that any mark-up in price for a supposed ‘error’ is completely unjustified, and although it makes the coin more interesting, it is not the mistake which it is often perceived to be.

But recently, a number of stories have been popping up regarding the ‘errors’ people have noticed, such as fading dots around the centre part, upside down edge lettering and misspelling of the edge inscription. Unfortunately these aren’t errors, but are simply caused by the mass production process, the way obverses and reverses are struck and how the coin has worn down in circulation.

The Paddington 50p coins were issued by The Royal Mint to celebrate the 60th anniversary of Michael Bond’s novel, “A Bear Called Paddington” and were some of the most sought-after coins of 2018, which is why collectors were particularly excited when some of the coins were discovered a few days before the official release…

The coins quickly made their way onto collectors’ forums and eBay, with one attracting a “sold price” of £16,000 – prompting interest from a number of national newspapers.

It’s highly unlikely that the transaction actually went through, and as the official launch date was just a few days later, we urged collectors to wait to be able to purchase the coin for just £3.99 instead.

We would always suggest caution and user discretion when buying and selling on eBay. To get a more realistic idea of what your coin could potentially sell for, view the ‘sold listings’ on eBay to see the actual prices buyers have been willing to pay, although again there is still no guarantee that these sales have all actually gone through.

So to help you get the most out of your money, we’ve created 5 eBay buying tips:

Whilst coins can be listed on eBay for incredibly high prices, it doesn’t mean they will actually sell at this price. Make sure you search for ‘sold listings’ when researching how much buyers are currently willing to pay to check that your coin is in line with this.

Tip 3) Check if the coin is real or fake

The only way to know for certain that a coin is real is for it to be x-rayed, however there are some simple checks you can make yourself such as making sure the edge inscription and date matches the design and that the coin condition reflects the amount of time it’s been in circulation. For example, the Kew Gardens 50p has been in circulation for nearly 10 years, so a shiny Kew for sale on eBay is likely to be a fake unless it’s in the original packaging.

Use our mintage charts and Scarcity Index to see how scarce the coin is and check our blogs to see if it has an interesting story that makes the coin more sought-after. Make sure you check for any errors that could add to the coins value, such as the wrong date or metal being used.

If the coin is in Brilliant Uncirculated quality it will most likely sell for more than a circulated coin which is more worn. Typically, the more worn the coin is, the less a buyer is likely to be willing to pay.

Remember you can also use our 6 point guide to valuing your coins to help you determine how much your coin might realistically be worth.

Best of luck buying and selling your coins! 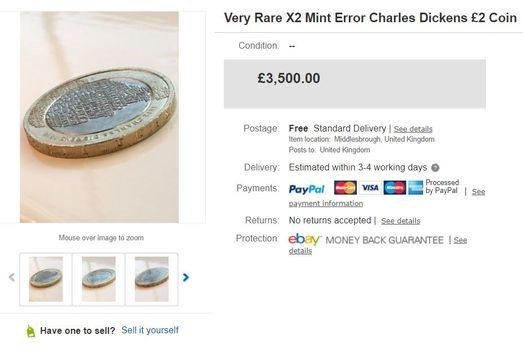 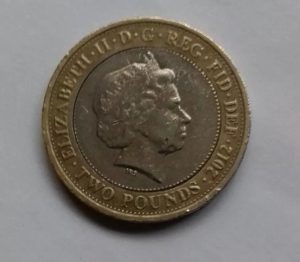 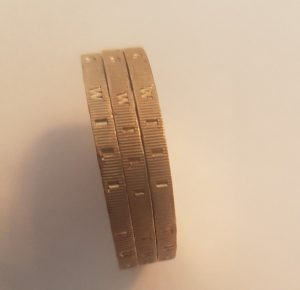