The UK banknotes have gone through some big changes since they were first introduced but do you know the story behind them?

In this blog, we guide you through the history of UK banknotes as we take a look at just how far they’ve come…

The first recorded use of ‘paper’ money was in China back in the seventh century! However, it was until over a thousand years later that paper money made its way to Europe.

This similar phrase still appears on British banknotes today: “I promise to pay the bearer on demand the sum of…”

When the Bank of England was established in 1694 to raise money for King William III’s war effort, they issued notes in exchange for deposits. These were the first recorded bank notes to feature a cashier’s signature!

The issuing of fixed denomination notes first started in the 18th century. Notes were printed with the pound sign and the first digit included, but any following digits were then added by hand!

In 1853, the first fully printed banknotes were introduced, meaning hand-written denominations on notes were phased out.

During the First World War, the link between notes and gold was broken. The government needed to preserve bullion stocks and so the Bank stopped paying out gold for its notes.

The late 20th century saw the first introduction of historical figures on the designs of UK banknotes. Since 1970, we’ve seen figures including scientist Isaac Newton, composer Edward Elgar and nurse Florence Nightingale featured on our banknotes.

In the 21st century we have seen the introduction of the polymer £5, £10 and £20 banknote, as a cleaner, safer and stronger alternative to the paper notes.

These notes have become incredibly popular with collectors, with some polymer £20 notes fetching far over their face value on the secondary market!

However, a lack of Black, Asian and Minority Ethnic (BAME) figures being recognised on legal tender led to campaigning for greater inclusivity in 2020.

These campaigns come after Chancellor Rishi Sunak stated he was considering proposals from a campaign group. He has since asked the Royal Mint to come up withnew designs honouring BAME figures who have served the nation – such as military figures and nurses.

Whilst details of these figures and designs remain under consideration, we look forward to hearing more as the story unfolds.

Did you know how far back in history our banknotes date? Let us know in the comments below!

Secure the last-ever £1 banknote to your collection!

In 2017, the Isle of Man confirmed that they will be keeping the familiar round pound coin. 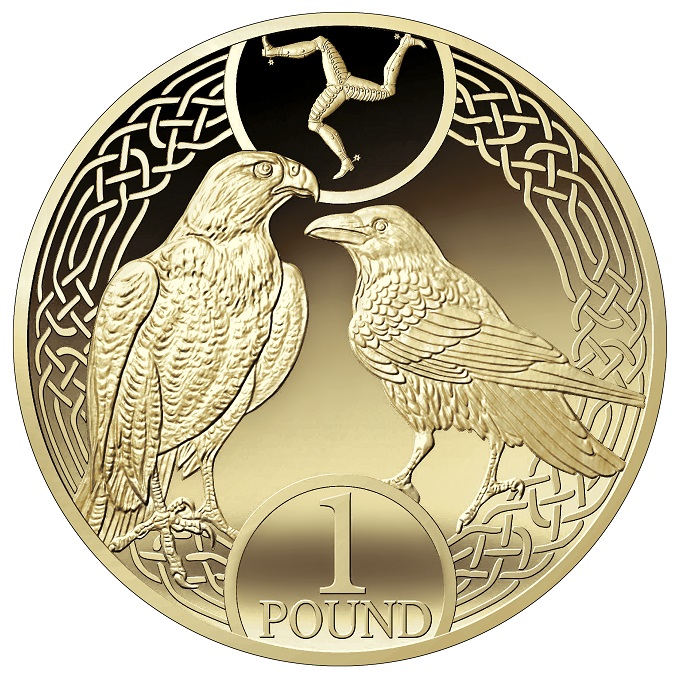 These birds are symbolically associated with the Island and feature on the Coat of Arms.

A Celtic interlocking border circulates the outside of the coin while the Triskelion (three armoured legs) features at the twelve o’ clock position.

In contrast, both Jersey and Guernsey have confirmed that they will stop striking the round £1 coin this year, opting to use the paper £1 note instead.

Not only are the Isle of Man keeping the £1 coin, all their circulation coins have had a total redesign and been struck at a new Mint. 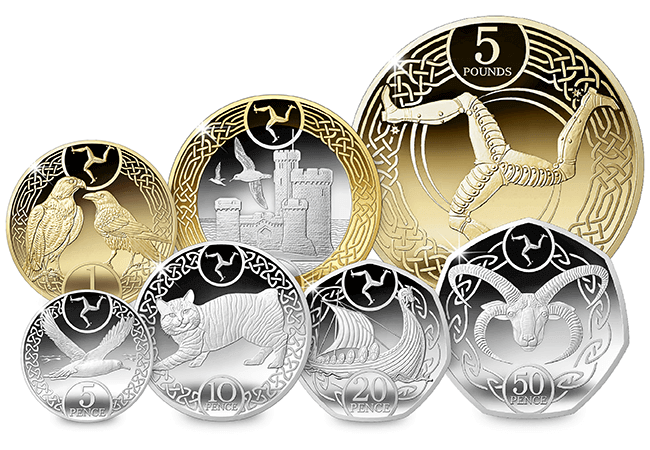 5 Pence – Features the Manx Shearwater, an amber-listed species of particular conservation concern on the Isle of Man. This design celebrates the increasing number of this traditional Isle of Man bird species.

10 Pence – Features the famous Isle of Man Manx Cat, best known for being entirely tailless. The other distinguishing characteristics include elongated hind legs and a rounded head.

20 Pence – The Isle of Man has a significant Viking heritage; key symbols are Odin’s Raven and Viking Longships. The design depicts a typical scene of a sailing Viking Longship.

50 Pence – The design depicts the Manx Loaghtan, a breed of sheep native to the Isle of Man. The sheep have dark brown wool and usully four or occasionally six horns.

1 Pound – The £1 coin features two birds – a Raven and a Falcon. These birds are symbolically associated with the island and feature of the Isle of Man Coat of Arms.

2 Pound – Featuring the Tower of Refuge, this important landmark was built upon the reef on the orders of Sir William Hillary, founder of the Royal National Lifeboat Institution in 1832.

5 Pound – The Triskelion (three armoured legs) is arguably the most known symbol of the island and is included in both the coat of arms and the flag of the Isle of Man. The Isle of Man also circulates their £5 coins making them the only Crown dependency country where you could find one in your change, and spend it. 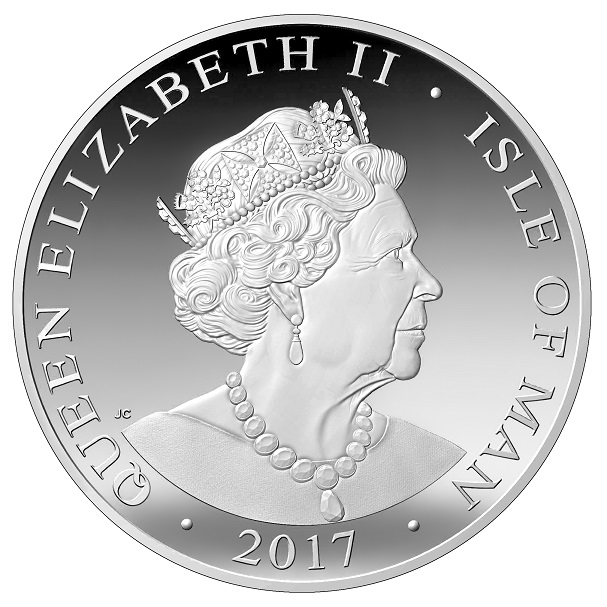 The new effigy of Her Majesty Queen Elizabeth II

And the changes didn’t stop there.

The coins also feature a new effigy of Her Majesty Queen Elizabeth II, created by designer and sculptor Jody Clark.

The outer description includes the Queen’s full title, country of issue and year of issue.

The new portrait will be used on coins from Crown dependencies and Commonwealth countries.

Although the Isle of Man have completely redesigned their circulation coins, they have not produced any new designs for the 1p and 2p coins. Instead they will continue to use their current stock.

Own the 2017 Isle of Man Triskelion Uncirculated £5 Coin 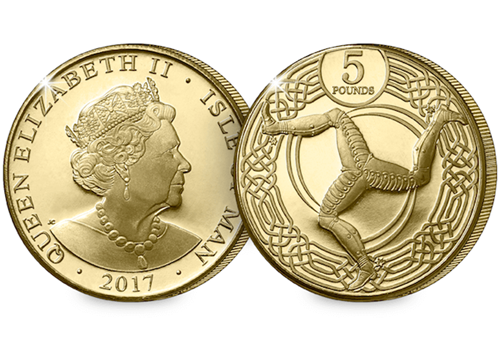 The Isle of Man is the only part of the British Isles to use a genuinely circulating £5 Coin and this coin has one of the lowest mintages for any British Isles circulation coin.

You can now own one in Certified Uncirculated condition for just £14.99.

In just a few weeks, Britain’s one pound coin will undergo a major makeover. The familiar round pound will change to become bi-metallic and 12-sided and will also have several new security features. But the shape of this new £1 coin is actually a throwback to the thrup’nny bit – an old favourite from the pre-decimal era.

The 12-sided threepenny is fondly remembered for its individuality. There was quite literally nothing like it before, and it holds the proud title of Britain’s first non-circular coin.

But, of course, it’s not the first major change in the nation’s £1.

I’ve taken a look back at some of the key changes for Britain’s coinage over the last 50 years to welcome the brand new 12-sided £1 coin, when it is issued on 28th March.

The 28th March 2017 is sure to become a historic day as we welcome the new coin which has been billed to become the most secure circulating coin in the world. This will be the first specification change to our £1 coin in more than 3 decades.

But the Thrup’nny Bit deserves recognition for being the inspiration behind our new £1 coin which is sure to become a collecting sensation. The Thrup’nny Bit was eventually withdrawn from circulation in 1971  after the introduction of decimal coinage which didn’t include Three Pence as a denomination. However, its legacy lives on, and is still widely regarded as one of the most iconic coins in British history. 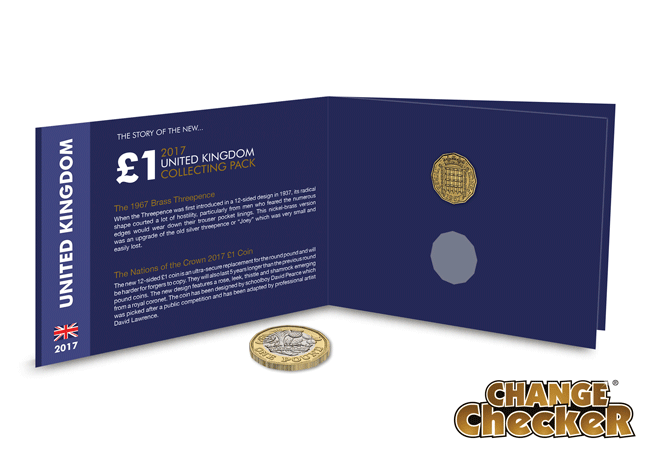 The Story of the new £1 Collector’s Pack

Click here to secure the ‘Story of the £1 Collector Pack’ which has space for you to house the new 12-sided £1 coin once you find it in your change, alongside the UK Brass 12-Sided Threepence Coin.