The Duke of Cambridge, HRH Prince William, is the second in line to the throne and the elder son of The Prince of Wales and Diana, Princess of Wales.

In 2022, the year that marks Prince William’s 40th birthday, The Royal Mint has issued a brand new £5 coin.

Significantly, this is the first ever UK coin to be solely dedicated to The Duke, with a design by engraver, Thomas T. Docherty capturing the prince’s likeness in exquisite detail.

The perfect addition to any royal collection, issued in honour of a much-loved prince and future King, you can now secure your 2022 UK Prince William 40th Birthday £5 and preserve this significant moment in British royal history for generations to come.

Whilst this is the only coin to be solely dedicated to HRH Prince William, he has been commemorated on two previous £5 coins…

This £5 coin was issued to celebrate the marriage of Prince William and Catherine Middleton on 29th April 2011.

The reverse bears the officially approved portraits of the couple and is only the sixth time in history that a double portrait has appeared on British coinage.

The designer, Mark Richards FRBS, was chosen in an invitation only process and describes his depiction of the couple as ‘a feeling that pervades all the photographs I have seen of the couple together’.

The image is taken from one of their first official engagements together.

This Four Generations of Royalty £5 coin was highly anticipated since the moment HRH Prince George of Cambridge was born on 22nd July 2013.

This was the first time ever that The Royal Mint had issued a coin that celebrated all four generations of royalty in line to the throne on a single coin.

Born to be King

The Duke of Cambridge has been second in line to the throne, since his birth in 1982. From a young age, he possessed a desire to undertake charitable activities and projects.

Alongside his efforts in promoting the welfare of those who are serving or who have served their country in the Armed Forces, Prince William’s charitable efforts expand into global affairs.

Protecting the natural environment for future generations is one of Prince William’s key priorities. His Highness supports wildlife conservation initiatives and even led key programmes to end illegal wildlife trafficking on a global scale.

In October 2020, His Royal Highness launched ‘The Earthshot Prize’ designed to incentivise change and help to repair our planet over the next 10 years.

The Duke of Cambridge is also committed to helping children and young people. From convening a new industry-led taskforce to combat online bullying, to publically highlighting youth-engaging programmes, Prince William is dedicated to making a difference in young people’s lives.

In the year that marks HRH Prince William’s 40th birthday, we can celebrate his achievements in raising awareness of these important issues.

To commemorate the future King of the United Kingdom, you can own the brand new 2022 UK Prince William 40th Birthday £5 coin today >>

Your coin has been struck to a Brilliant Uncirculated quality and comes protectively encapsulated in official Change Checker packaging, to preserve the quality of your coin for generations to come.

The Prince of Wales is the world’s longest serving heir apparent, supporting Her Majesty the Queen as her representative while also playing an important role in founding and supporting numerous charitable causes. And on the 14th November this year, HRH The Prince of Wales will celebrate a landmark birthday.

To celebrate the 70th birthday of our future King, The Royal Mint has just announced the release of a brand new UK coin.The release of this coin is sure to be exciting for Change Checkers  in the knowledge that the last UK £5 coin that featured Prince Charles turned out to be extremely rare.

The Prince of Wales has had numerous commemorative coins minted to mark special occasions throughout his lifetime, and to celebrate his 70th birthday we’ve taken a look back at the history of Prince Charles in coins.  From his first marriage to Princess Diana, to landmark birthday celebrations and now in 2018 as heir apparent to the throne, he will celebrate his 70th birthday… 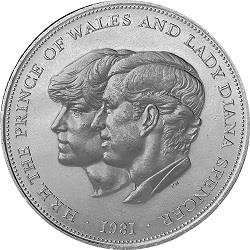 The first ever UK coin issued in the Prince of Wales’ honour, was for his wedding to Lady Diana Spencer in 1981.  The coin was struck by The Royal Mint and was a crown tariffed at 25 pence (although no denomination was actually inscribed on the coin).

It was the first time that three people were portrayed on a British coin simultaneously, with the reverse featuring the conjoined profiles of the bridal couple and the effigy of Her Majesty the Queen by Arnold Machin RA.

You can add this coin to your collection here >> 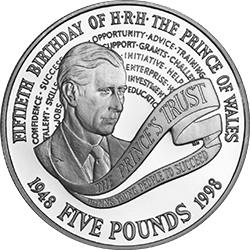 To mark his 50th birthday, The Royal Mint struck a £5 coin issued in five metal versions, with a portion of the proceeds going to the Prince of Wales’ Trust.

This charitable organisation was established to further the interests of young people and also provides the theme for the reverse, which portrays the Prince alongside a 33 word inscription setting out the aims and ideals of the Trust. This inscription is so long that it actually takes the title as the longest inscription on any British coin!

Secure the coin for yourself here >>

The Wedding of Prince Charles and Camilla Parker Bowles – 2005 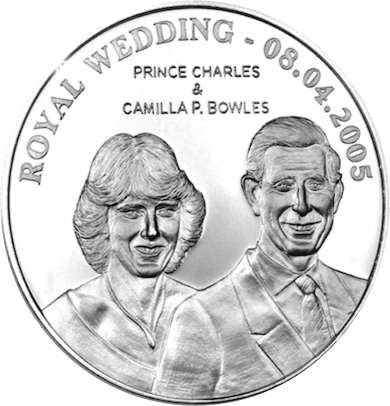 2005 Wedding of Prince Charles and Camilla £5

This 1 Dollar coin from the Cook Islands was issued to celebrate the wedding of Charles and Camilla, however it actually features the wrong date following a last minute delay to the wedding of 24 hours, so that HRH Prince Charles could attend the funeral of Pope John Paul II as the representative of the Queen. The date was unable to be changed as the coins had already been struck!

The design features a portrait of the couple and the incorrect date ‘08.04.2005’ and has a very low mintage of just 5,000, making it a significantly scarce and collectible coin.

Own this coin for your collection here >>

This £5 coin was released for Prince Charles’ 60th birthday and in fact has the lowest mintage figure in the history of UK ‘circulated’ £5 coins. Just 14,088 of these coins were struck by The Royal Mint in 2008 and was one of the last £5 coins to be issued at face value.

This coin features the portrait of Charles by Ian Rank-Broadley FRBS, whose effigy of the Queen has been used on British coins since 1998. The inscription ICH DIEN means ‘I serve’ and is taken from the Badge of the Prince of Wales.

This coin is extremely sought after by collectors but unfortunately we do not have any stock currently available. Are you lucky enough to have this coin in your collection? 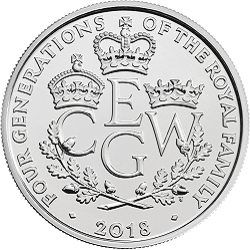 At the start of this year, The Royal Mint released this £5 coin which was highly anticipated from the moment HRH Prince George of Cambridge was born on 22nd July 2013 – The Four Generations of Royalty £5 coin.

This is the first time ever that The Royal Mint has issued a coin that celebrates all four generations in line to the throne on a single coin.

Add this coin to your collection here >> 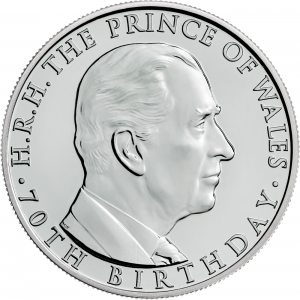 2018 has been a truly unforgettable year for the Royals, celebrating the Queen’s 65th Jubilee, the birth of Prince Louis, the marriage of Harry and Meghan and on the 14th of November, the 70th birthday of HRH The Prince of Wales.

This brand new £5 coin celebrates Prince Charles’ 70th birthday this year, featuring a brand new portrait of the Prince, created by widely respected designer, Robert Elderston who was once an apprentice engraver at The Royal Mint at its previous home in Tower hill more than 50 years ago.

What makes this coin particularly interesting is that it could be very similar to the portrait of Prince Charles that will feature on all United Kingdom coinage once he becomes King.

It’s clear that each coin commemorating a momentus period of Prince Charles’ life has proven to be a rarity in some way, whether it be due to having such a low mintage figure, an unusual design or fascinating story.

As we know, £5 coins are reserved for the most important Royal and Historical anniversaries, and this £5 is the perfect way to celebrate the birthday of our future King. 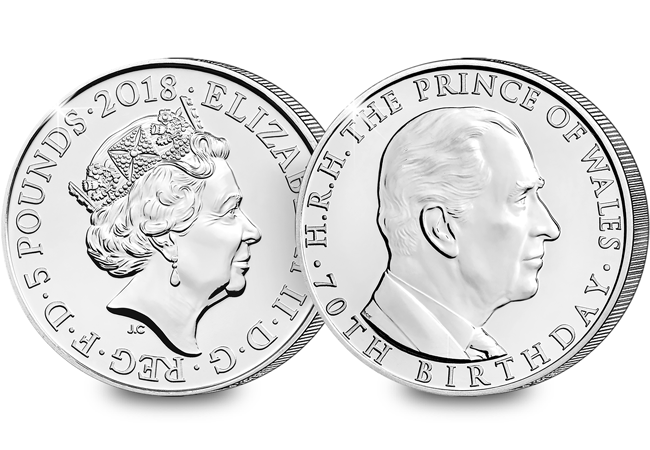